Margaritas and beer, together at last

It’s a margarita and a Corona Extra, but not simply poured together. There is an interesting trick to the Green Mill Restaurant’s specialty drink called the CoronaRita. 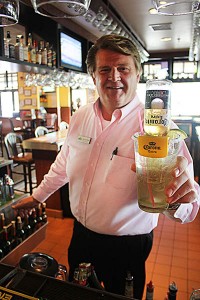 David Mord,
manager of the Green Mill Restaurant in Albert Lea, holds up a drink called the CoronaRita.

It is a classic margarita in a pint glass with a salted rim and a wedge of lime but with a clip on the glass that holds a 7-ounce bottle of Corona Extra upside down.

David Mord, manager of the Green Mill in Albert Lea, shared what makes this beverage unlike most. The upside down bottle forms an air pocket. As a person drinks the margarita, a little bit of the Corona flows into the drink.

The drink is catching on nationally. It made appearances at various Mexican restaurants and was made nationally famous through the Chili’s Grill & Bar chain of restaurants. The drink clips are available to purchase at online shopping sites, though many are out of stock. Pinterest, Tumblr and other sites show the drink made at home in a pint glass or a big margarita glass without the clip. The necessary air bubble forms with or without it.

Mord said the drink is popular among women as a quality drink on a sunny day. The Green Mill plans to have them featured through the end of September but will make them anytime a customer wants one, even in the middle of January.