Judith Watland McIntyre, Ph.D. was born on Aug. 19, 1930, in Missouri. Three weeks later she was adopted by Dr. Clarence and Pearl Tyrholm Watland and brought to live in their home on Shoreland Heights, a new suburb of Albert Lea. She attended Abbott Grade School with three of her life-long Shoreland Heights friends, Joan Morin, Harriet Jorgenson and Mary Ehrhardt, plus other “city” students, many with whom she still renews friendships at class reunions. She vividly remembers the elementary superintendent, Miss Ivy, who, when visiting Abbott School, always asked her, “What birds did you see today, Judy?” It later became a prediction for her final career. 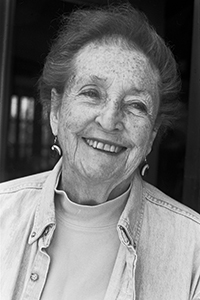 McIntyre began piano lessons at age 4 with Sadie Bliss Cox, played in her first recital at age 5 (and still has that recital program), and studied under her until leaving for Carleton College in 1948, where she studied under Eugene Bailey. In high school she was a member of the drama club and played an old lady in the all-school play, “The Eyes of Tlaloc.” She was also in science club, sang in A Choir and accompanied B Choir, and was president of the French Club. She graduated from Albert Lea High School in 1948.

At Carleton she majored in French, rode in the annual horse show and danced at May Fete each spring, sang in the choir for four years, thrived on her ceramics classes and graduated in 1952.  Then she headed to Norway and summer school at the University of Oslo. Those were the days of 10-day shipboard crossings… 10 days of eating and dancing! No airplane can make up for that!

Back in the USA, McIntyre was hired for the Young Homemakers’ Program, Dayton’s experiment to bring young men and women to train under senior interior designers, then focus on helping a younger clientele to design and furnish their homes.  After three years, she left Dayton’s to work with Lucille R. Smith Inc. in Edina.

She married John P. McIntyre (Pat) in 1957. In 1959 they built their first home in a semi-rural part of Bloomington and acquired the first of their now 55 years of standard poodles. She has hunted with them, bred them and showed them in obedience trials. Soon after the home was built, she and her husband adopted three sons, and she still remembers when her second son (Richard) said, “Wow!  They didn’t say you had 14 dogs!”

No doubt it was the country-like setting which began the career she is best known for, ornithology. One day, as she looked out her back window, she saw a strange bird that looked like a peacock! Frustrated that she couldn’t positively identify it, she called the Bell Museum of Natural History director at the University of Minnesota and asked if she could take a course in ornithology. “How many biology classes have you taken?” he asked. “None,” she replied. “Then you can’t take ornithology.” She asked for the ornithology professor, Dwain Warner, who asked the same question, and now she answered, “None called biology, but two semesters of zoology at Carleton College.” “Carleton?” came the response. “I’m a Carleton graduate.” “You may certainly take my course.” The rest is history.

It is probably loons for which she is best known, perhaps because she is a strong advocate for communication by scientists with the public. She has written for most American natural history magazines and been repeatedly funded by National Geographic for field work. Her cover story in 1989 resulted in requests for speaking engagements around the country, and her 1988 book on loons (University of Minnesota Press) sold out its first two printings.

At Utica College, her teaching focused on gross anatomy (with cadavers), neuroanatomy and neurophysiology for therapy students, plus a variety of zoology courses for biology majors.

She received the Crisifulli Distinguished Teaching Award and the Harold T. Clark Award for Excellence in Research, and retired as Professor Emerita with Distinction. She founded two U.C. seminar series, Nexus (where professors discuss their research) and Geotalk (focus on world geography), and chaired the pre-med committee for 10 years. Her community service includes boards of the Utica Symphony Orchestra, Kirkland Bird Club, Western College Women and Scandinavian Club of the Mohawk Valley (all with at least one term as president), and she is currently serving on the Board of Sculpture Space. She is a member of most national ornithological organizations and was elected a fellow of the American Ornithologists’ Union.

Several years ago, a unique professor of music was hired by Utica College, a pianist with a doctorate in bird music. The professor and McIntyre combined interests, then gave and recorded two recitals. She lectured on the birds of each composer and played tape recordings of their calls, and the other professor lectured on the composers, and together they played their compositions, most written for two pianos. What fun!

“Albert Lea, you gave me a great start and an education which has fulfilled me throughout life,” McIntyre said. “Thank you!”