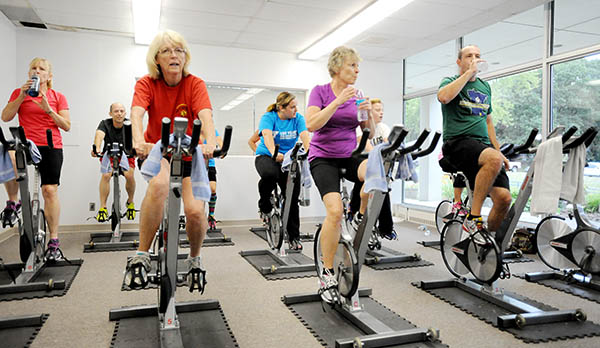 Members of a spinning class taught by Destiny Smith continue peddling
at the Albert Lea Family Y on its 100th anniversary, which was July 24.

For the last year and a half, Kelly Hendrickson has been a mainstay on the Keiser M3 stationary bikes at the Albert Lea Family Y. 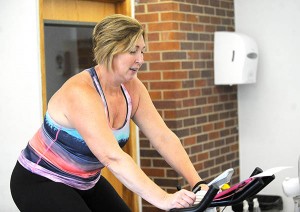 Kelly Hendrickson, a spinning instructor at the Albert Lea Family Y, teaches a class on Aug. 11.

As an indoor cycling instructor, her favorite part of teaching is seeing new faces in her class.

“It’s fun to meet new people and get to know them,” she said. “You get to meet people who you normally wouldn’t see on a day-to-day basis. It’s a diverse group.”

Indoor cycling — spinning — is a low-impact workout, which means it’s not hard on joints. If a person has a lingering injury, riding a stationary bike could be an effective way to exercise without pain, Hendrickson said.

“The spin bikes give people another avenue to get a good workout without as much pressure or pounding on their knees or hips than they would have on a treadmill or on the track,” she said.

Hendrickson noted that swimming is another low-impact workout that complements spinning.

Along with its indoor cycling class, the Family Y offers perpetual motion and cycle-kettlebells classes. 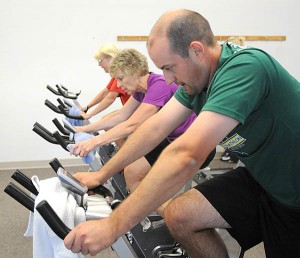 Spinning students get a workout on Keiser M3 stationary bikes at the Albert Lea Family Y. From right are Mark Heinemann, JoAnn Bracker and Vikki Pence.

In the perpetual motion class, students alternate cycling with strength training off the bike. The cycle-kettlebells class calls for spinning, then full-body kettlebell exercises.

Mark Heinemann of Albert Lea is a fan of the perpetual motion class. He said he’s been taking it for two years.

“It’s a great mix of cardio and weight training,” he said.

An exercise that frequently goes along with spinning is cycling on the road. When weather like rain or snow doesn’t permit cyclists to ride on the roads, spinning is a good substitute to stay in shape, Hendrickson said.

“A lot of cyclists do them both,” she said. “They’ll come in and use the stationary bikes and then go outside and use their bikes there as well.”

“My boss exercises every day, and he promotes being able to do it,” she said. “It’s great to get out and work out over the lunch hour even if it’s only 20 minutes or a half hour.”

The Family Y has 15 stationary bikes. They’re equipped with heart monitors and sensors that detect speed and distance. The tension settings can be adjusted for any skill level, said spinning instructor Destiny Smith.

“The bikes are really nice,” she said. “They’re great for a beginner — someone who’s never work out before — or someone who works out every day.”