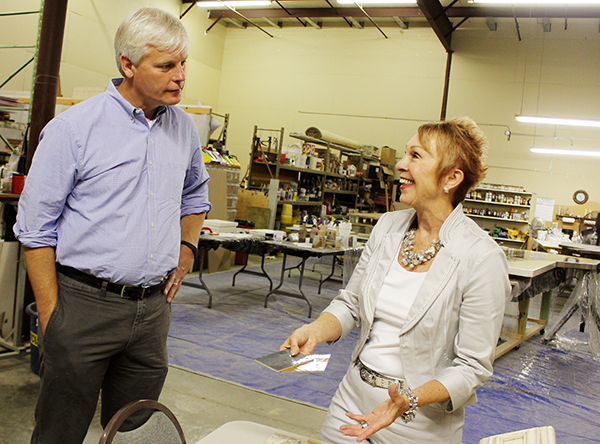 Speaker of the House Paul Thissen, DFL-Minneapolis, listens Thursday morning as Granicrete Minnesota co-owner Jean Eaton talks about a decorating project for one of her clients. – Sarah Stultz/Albert Lea Tribune

Minnesota Speaker of the House Paul Thissen applauded Albert Lea’s Granicrete Minnesota on Thursday during a stop in town and tour of the business. 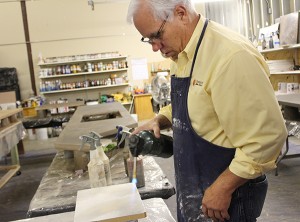 Owners Tom and Jean Eaton shared the success their business has seen since they opened in April 2008. They said they got started after their son saw the Granicrete product used on TV design shows and encouraged them to take a class about it. Little did they know they would be amazed at the product and would want to share it with others. It can be laid over existing countertops, floors and showers and looks like granite.

After seeing high success at their Albert Lea location — which is in the business incubator of the Albert Lea Business Development Center — they opened a showroom and training center in Brooklyn Park, and several of their independent installers have also opened their own showrooms.

“It’s just endless what this product can do,” Jean Eaton said.

She said they have trained people in the business from several states, including 8 to 10 percent who are women. She commented on the flexibility the job can offer to women, particularly those with children, while still providing a high wage.

The business has been featured on “I Hate My Kitchen,” through the DIY Network and recently at Culver’s in Owatonna.

Thissen, DFL-Minneapolis, said he thought the journey of Tom and Jean Eaton’s business was an “amazing story,” and showed how it can be inexpensive to learn a new trade.

He said in 2015 he hoped the Legislature could focus on childcare concerns for women and families.