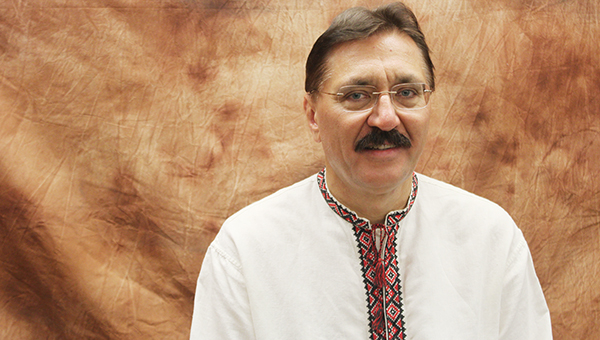 Dr. Leonid Skorin wears a shirt from Ukraine called a sorochka. Skorin was born and raised in Chicago but both of his parents were immigrants from Ukraine. He now is an eye surgeon in Albert Lea. – Tim Engstrom/Albert Lea Tribune

Just when Ukrainians were starting to put the past behind them and think better of their neighbor, Russian President Vladimir Putin has pushed Ukrainians to hate Russians all over again.

That’s the view Albert Lea ophthalmologist Leo Skorin has of the Eastern European conflict. Skorin, born in Chicago, is the eldest son of immigrants from Ukraine and has visited the land many times for personal and professional reasons.

Many Russians view Ukraine more like a breakaway region, but Ukrainians strongly desire to keep their own country because of injustices committed by Russia over the centuries. The most notable one was the Holodomor, a famine created by the Soviet Union in 1932 and 1933 either to weaken and demoralize Ukrainian nationalism or as a result of collectivization or both. The Holodomor killed an estimated 4 million Ukrainians and millions more when birth defects are counted. What’s more, Ukraine is the breadbasket of Eastern Europe. 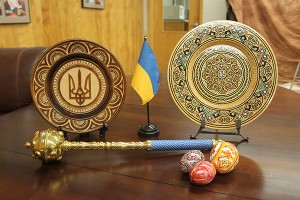 The flag of Ukraine is yellow and blue, representing wheat and sky. Surrounding it are artifacts from Ukraine: plates, a sceptor and eggs. All the decorations are loaded with symbolism. The gold trident in the center of the plate on the left is the coat of arms of Ukraine. – Tim Engstrom/Albert Lea Tribune

Ukraine was briefly independent following the fall of the Russian czar in 1917, but communists leading the country allowed it to join the Soviet Union. Many Ukrainians in World War II saw the advancing German armies as liberators, only to be taken as slaves. Ukraine became independent again in 1991 when the Soviet Union collapsed.

Skorin’s grandparents described collectivization, when the communists had everybody give up land. “We pretend to work. They pretend to pay us,” was one summary. They would talk about the Holodomor and how people ate dogs, cats, rats and grass.

When the Germans came during World War II, Skorin’s father and his father’s parents were taken as slaves to work on Austrian farms. They came to the United States after the Americans liberated the labor camp.

On his mother’s side, Skorin’s grandmother had lived under Soviets, then Nazis. Between the retreat of the Nazis and before the Soviets regained control, there was time to escape.

“I am never living under communists again,” she was noted to declare, Skorin said. The family left Ukraine and moved to America.

Skorin’s mother and father met in Chicago in the early 1950s.

The father of Skorin’s wife, Kathy, also came to the United States from Ukraine. He was liberated in Germany at a labor camp.

Skorin finished his training as an ophthalmologist in 1991, when Ukraine became independent. Through a connection, Kathy and Leo visited and quickly learned how desperate people who had lived behind the Iron Curtain had been for medical care. Donations from eye-oriented medical companies funded their effort to provide care and equipment.

The last time he performed surgery while visiting Ukraine was 2000. Eastern Europe was modernizing and no longer needed Western assistance with medical care. There remain rural areas that lag behind but are better off than in the communist era, he said. They lack indoor plumbing, telephones and natural gas. Some have electricity.

Skorin has visited for professional reasons. About two years ago, he attended a glaucoma conference in the worldly Black Sea port city of Odessa.

Ukraine has been in the headlines since Malaysian Airlines Flight 17 was shot out of the eastern Ukrainian sky by a surface-to-air missile, killing all 298 people on board the Boeing 777 airliner. American evidence has pointed to the missile being fired by Russian-backed rebels in eastern Ukraine.

Skorin’s view is that younger generations of Ukrainians and Americans with Ukrainian descent were beginning to view Russia without the animosity of older generations. What Putin is doing in Ukraine — the annexation of Crimea in March and the ongoing support of rebels — has dashed the hope of improved relations.

“He has gone out of his way to antagonize further,” Skorin said. “Everyone in Eastern Europe is worried about what he is planning on doing.”

The bottom line, Skorin said, is Ukraine wants to be left alone to be its own safe, sovereign nation. He said Putin fails to realize Russia is more secure with a strong Ukraine. Instead, Putin, who publicly remorses over the loss of land at the fall of the Soviet empire, works to destabilize its neighbors.

Interesting fact: Skorin originally became an optometrist. He wanted to be able to help patients through surgery and went back to college to become an ophthalmologist.