Memorial services for Patricia Ann McGuire of Glenville will be at 2 p.m. Saturday at United Methodist Church in Glenville. The Rev. Joyce Shaman will officiate. Visitation will be from 4 to 7 p.m. Friday at Bonnerup Funeral Service in Albert Lea and one hour prior to the service at the church. Interment will be in Greenwood Cemetery in Glenville. 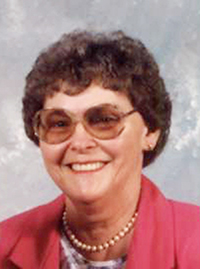 Pat was born July 16, 1931, in Albert Lea, the daughter of Ernest and Hannah (Jordahl) Kabrud. She attended public school in Glenville and was united in marriage to Richard McGuire on April 2, 1955, in Northwood.

Pat was an active lifetime member of United Methodist Church in Glenville and the American Legion Auxiliary. She was a bartender for many years in Glenville and also worked at Land-O-Lakes. She became disabled at the age of 50 but still enjoyed driving to Albert Lea daily with friends. Each year Pat looked forward to attending both the Kabrud family and the Jack Pine Savage reunions. She enjoyed going to rummage sales, baking and cooking, but mostly spending time with family and friends.