Pushing the envelope with body art 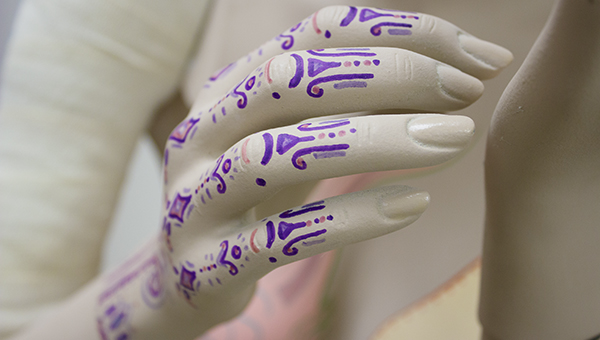 Intricate designs are painted on “Oceana”’s hand, though Susanne Crane, one of the artists who worked on the mannequin, said her design may change by the time the show is completed. – Hannah Dillon/Albert Lea Tribune

Art can push the envelope in a variety of ways, but the Freeborn County Arts Initiative is pushing it with something as simple as the human form. 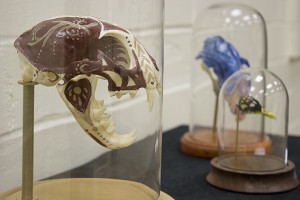 The Arts Initiative opened its first juried show Wednesday with a body art show that showcases pieces that centralize around art on or about human bodies.

Elisha Marin, member of the Arts Initiative, said that roughly 90 pieces were submitted in what Susanne Crane, the artist who owns the Bessessen Building where the Arts Initiative is housed, said was a short call for submissions.

Marin said that a volume of submissions that large for a short call is a huge thing and shows the momentum and support of this show. Crane said she was happy that people were interested and that this has gone further than anyone could have expected.

Of those 90 pieces, roughly 30 were accepted into the show. Paintings and photography line the walls of the gallery and other three-dimensional art sits on tables.

One of the most noticeable pieces in the room is a life-sized mannequin of a woman, adorned with a wig and painted with bright colors. Her legs are painted as a mermaid’s tail, a cast is on her arm and intricate designs are painted on her hand.

Crane said that the mannequin was a group project and will be continually changing throughout the show. She urged people to come back each week to see how the mannequin, who was christened “Oceana,” has changed. 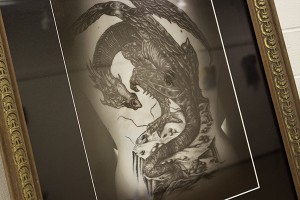 A number of photographs of tattoos were present in the body art show, including “Dragonback” by Julie Bronson. – Hannah Dillon/Albert Lea Tribune

Gilbert Johnson Jr., tattoo artist and owner of The Chapel Studio, had submitted 20 pieces to the show, half of which were photos of his tattoo work and half were painted skulls.

The painted skulls are a new art form he had picked up recently. Johnson said he doesn’t paint pictures on the skulls but focuses more on designs and nature, like trees. One of the skulls accepted into the show was painted with a galaxy design.

Johnson, like Marin and Crane, believes that this show is a good thing for Albert Lea. He said body art is very prevalent in today’s society and that it is important to focus on newer types of art as well as more traditional types.

Crane agreed, saying that she conservatively estimates that about a quarter of Albert Lea’s population has body art in some way, be it tattoos or body piercings.

“I guess the Freeborn County Arts Initiative wants to make it clear that this isn’t your grandmother’s art center. I support that 100 percent,” she said.

Marin said the show also ties in well with Albert Lea’s push toward health, as putting the human body on a forefront creates a more holistic approach to wellness. 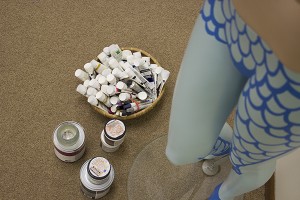 Painting supplies sit by “Oceana,” a mannequin in the body art show that has been a group artistic effort. The mannequin’s design will change throughout the show. – Hannah Dillon/Albert Lea Tribune

He said the Arts Initiative wanted to challenge the idea that bodies are disgraceful or private, but instead are “something to celebrate and cherish.”

Crane said the idea of a body art show was well-received by the members of the Arts Initiative, which held its open house July 16 after over a year of organizing.

Who: The Freeborn County Arts Initiative