Rainfall slows but doesn’t stop annual Cruise to the Cove 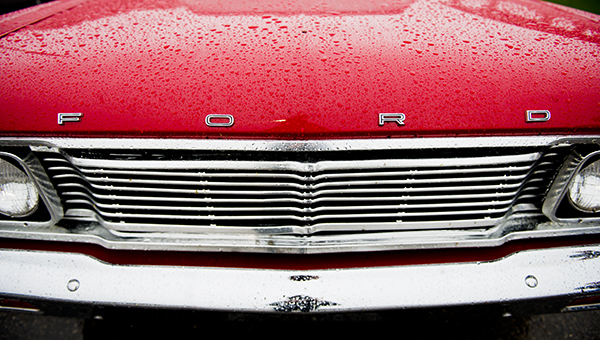 While the rain may have kept some from cruising, the third annual Cruise to the Cove car show still went on.

The show, hosted by the Old Car Company of Southern Minnesota, was originally slated to take place between 4 and 8 p.m. at Wedgewood Cove Golf Club. Consistent rain throughout the day and evening limited the number of participants and attendants, but roughly 10 to 15 cars still were on display at the club Thursday evening.

More than 1 inch of rain fell on Albert Lea on Thursday.

The show disbanded a bit early, but not before visitors checked out cars, talked shop and gave out door prizes. Old Car Company club member Don Blake said the show is meant to be a social gathering, not a competition. The purpose of the event is for members to get together and have a good time. The show was originally the idea of Wedgewood owner Jerry Vogt, who modeled it after an annual car show in Spring Valley that’s been taking place for more than 30 years. Blake said that last year’s Cruise to the Cove had about 150 cars showing, and that the goal is to eventually have between 200 and 300 cars on display.

Blake, who brought his 2014 Chevy Corvette Stingray to the event, said he’s been involved with classic cars since the mid 1960s. He also has a 1956 Chevy Bel Air Two-door Hardtop and a 1963 Chevy Corvette split-window coupe.

Blake said there are about 43 members in the club that are all from either southern Minnesota or northern Iowa. He joined the club in 2001, and said it meets once a month and puts on different events in the area.

Bob Neudecker of Clarks Grove made it with his 1962 Buick Skylark Sport Coupe. He said he has been collecting old cars for about 22 years, but only has one at a time as he trades or sells them when he’s ready for a different one. He even traded one of his cars for the mobile home he currently lives in. He’s had 37 different cars in those 22 years. Neudecker has had the Skylark for over a year — a personal record for him — and has no immediate plans to get rid of it any time soon. He said the car’s extremely rare, and that roughly 34,000 were made. The car has the aluminum motor that was originally in the cars until Land Rover took over the rights in 1967, and has a 190 horsepower engine.

Neudecker said he goes to between 28 and 30 car shows a year, usually in the Midwest region.

He said he’s put about $3,500 into the car so far, most of which went into body work, a paint job that made the car two-tone and redoing the upholstery. He’s able to find a lot of the parts he needs for the car in junkyards.

“It keeps you out of the bars and out of the casinos,” Neudecker said.

Albert Lean Stan Opdahl brought his 1965 Ford Fairlane 500 to Cruise to the Cove. He said he had a similar car when he was in college, and that the nostalgia was a factor in him purchasing the car about five years ago. Opdahl said he’s put a considerable amount of work into the car — sandblasting it to get rid of it’s original yellow color, fixing body work and painting. He goes to about five car shows a year.

Dave Skogheim of Albert Lea showed up Thursday with his 1932 Plymouth three-window coupe. He said he acquired the Plymouth body when he was 14, and over the years put it together with a Ford frame and a Mercury Flathead V8 engine. Skogheim, now 72, said his brother-in-law, Rex Garr, found the frame for him when he was racing stock cars as a part of Garr Bros.

“It was a perfect fit,” said Skogheim.

His Plymouth Coupe has suicide doors — doors hinged at the rear. They’re rarely found on modern vehicles due primarily to safety concerns. Skogheim said there are special sets of locks on his meant to keep the doors from flying open when the car’s being driven.

“You don’t want that to happen,” he said.

The Plymouth is Skogheim’s baby. When asked what his favorite aspect of maintaining it was, he couldn’t decide. 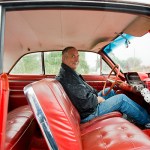 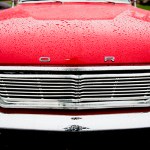 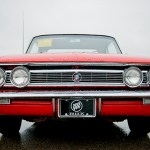 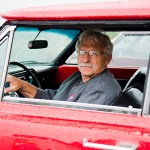 Stan Opdahl has had his 1965 Ford Fairlane 500 for about five years. He said he had a similar one when he was in college, which prompted him to buy the one he has now. – Colleen Harrison/Albert Lea Tribune 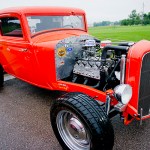 Dave Skogheim brought his 1932 Plymouth Three-window coupe to Thursday’s Cruise to the Cove car show. Skogheim, now 72, said he got the Plymouth body when he was 14, and over the years put it on a Ford frame with a Mercury Flathead V8 engine. – Colleen Harrison/Albert Lea Tribune 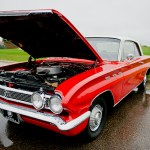 Bob Neudecker’s been collecting classic cars for 22 years. He said the motor in his 1962 Buick Skylark Sport Coupe is the original aluminum which was only in the cars until 1967, when Landrover took over the rights. – Colleen Harrison/Albert Lea Tribune