Jukrao Oman gives her testimonial of going through the Be Your Best College Prep Academy during the program’s graduation Thursday night. – Eric Johnson/Albert Lea Tribune 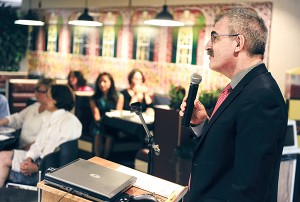 Be Your Best, which started in 2007, is a free summer program designed to help students ages 16 to 22 better prepare for college.

“This is one of the state’s best programs,” Rosenstone said. “It makes a difference to a lot of people.”

Program leaders receive referrals from high school counselors for some students, while others put in their own applications. Students participate in writing, reading, math and career planning. They also attend seminars, workshops and field trips.

Multicultural Programs Coordinator Yesenia Mendoza was excited about the program this year.

“It’s just a way to get students kind of exposed to the college experience,” Mendoza said.

All 23 students in this year’s Be Your Best weren’t native English speakers. For Fabiola Marquez, 18, the classes helped her improve in both English and grammar, skills she was excited to work on.

“I wanted to increase my English and get a better understanding of English,” Marquez said.

Marquez plans to attend Riverland in Owatonna after she graduates high school next year. After Riverland, she plans to continue on to a four-year college, but she hasn’t picked a major yet.

For 18-year-old Luis Fernando, the summer classes were a way to improve in math and English.

“It was a really helpful thing; it helped me a lot,” Fernando said.

He plans to enroll at Riverland Community College this fall and major in carpentry.

Maria Gutierrez, 17, also plans to attend Riverland, but she still has a year of high school. Gutierrez got involved with the program after both her sisters were involved.

“I improved so much on my scores,” Gutierrez said.

She hopes to transfer to Winona State University after two years of Riverland and study criminal justice.

Ten of the graduates plan to enroll at Riverland this semester. The other 13 are still in high school.

Mendoza hopes to help students become aware of resources available at the college and in the community.

Mendoza was excited to see the chancellor at the event. After meeting him earlier in the year at a separate celebration up north, she explained what the program did and sent him an invitation to the World-Cup themed graduation.

This is the eighth year of the college preparation program, which has served more than 180 students. Be Your Best was started through a MnSCU grant, but the funding only lasted one year. After a successful first year, the Hormel Foundation started funding it through its APEX Austin program, according to Director of Retention and Student Success Danielle Heiny.

“It’s just been a wonderful project for the college and the families and students involved,” Heiny said. “This summer academy is one of the most fulfilling projects that I work with at the college.”