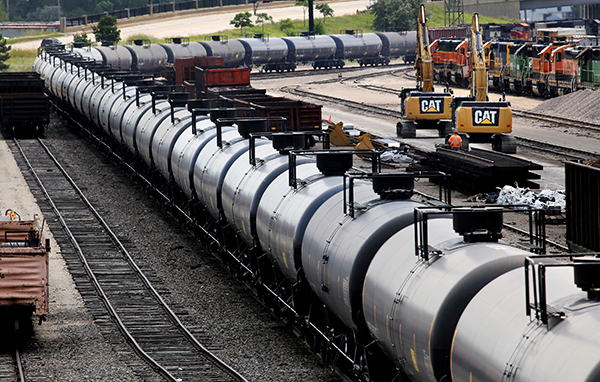 FRIDLEY — Tons of corn spilled into Locke Lake on a summer morning three years ago after a freight train derailed near Mary Jo Czaplewski’s Fridley home. It turned the lake yellow.

“I couldn’t believe my eyes,” she said, recalling the twisted mess of 17 railcars off the tracks and corn everywhere.

The recovery wasn’t pleasant, but Czaplewski and others who live near the north metro tracks know it could have been much worse had the cargo dumped in the lake that day been oil, not corn. 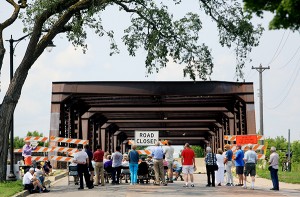 A town hall meeting on oil train transportation is held at the foot of the St. Anthony Parkway bridge in Minneapolis on July 30. The meeting, held by MN350, was intended to bring awareness to the volume and safety concerns surrounding the oil traffic traffic crossing through Minnesota from the Bakken oil fields in North Dakota. – Jeffrey Thompson/MPR News

“If a train with oil derailed and exploded,” she said, the neighborhood “wouldn’t have a chance.”

As oil train numbers have jumped, so have the worries about an accident. Fridley sits on one of the main routes that haul volatile crude oil from North Dakota to East Coast refineries. About three-quarters of oil pumped from the booming Bakken oil fields end up on a train through Minnesota. Typically, that amounts to 50 million gallons a week.

The density of Twin Cities communities makes them especially vulnerable if a train derailed and erupted, as one tragically did in Quebec last year. Casselton, N.D., narrowly escaped tragedy in December when oil cars left their tracks and exploded into a massive fireball just outside of town.

In addition, state transportation workers are mapping the safety risks of all 500 grade crossings along the oil routes, where trains may intersect with cars and trucks. One factor they’re looking at: How many vulnerable populations — places such as nursing homes, hospitals and schools — sit near those intersections.

“If something happens, the first and most effective response is to evacuate people out of the half-mile range as soon as possible,” said Dave Christianson, the Minnesota Department of Transportation’s point person on freight rail.

“Response within the first 10 or 15 minutes is absolutely critical,” he said. “If you’ve got a fixed or vulnerable population, that’s going to be hard to do.”

The Twin Cities, St. Cloud, Fargo-Moorhead and other larger population centers carry higher risks of injury or death simply because of their size, he added. The state’s rankings will help prioritize which crossings should get a sliver of the $2 million set aside for upgrades.

The state is also finalizing a plan to train emergency responders and determine how best to share special firefighting equipment. Christianson estimated that only about half of Minnesota communities along the oil routes have been trained to respond to a catastrophe involving the highly flammable crude oil.

The BNSF railroad has begun sending emergency responders to special training in Colorado, including firefighters from St. Paul who recently returned from a session. And this year alone, BNSF has trained over 1,000 first responders on hazmat response in communities across Minnesota, said spokeswoman Amy McBeth.

This spring, the industry also agreed to slow train speeds to 40 miles per hour in urban areas, including the Twin Cities.

Some advocates, though, think state and federal governments need to do more.

Last week, the environmental group MN350 honored the victims of the Lac-Megantic derailment in Quebec by reading the names of the 47 people who died in the fireball.

The spike in oil traffic is a real cause for concern, state Rep. Frank Hornstein, DFL-Minneapolis, told the crowd. “This is the problem: The sheer amount, the sheer volume, is unprecedented,” he said.

Policymakers are just beginning to wrap their arms around the issue, Hornstein said, noting that the National Transportation Safety Board has urged federal regulators to protect the public from oil spills and fires by selecting routes that would avoid population centers.

The federal government recently proposed new rules that would improve the safety of tanker cars. For Hornstein and other state officials who have seen Minnesota railways turn into national crude oil arteries, those changes can’t come soon enough.

“This system as it’s currently constructed — with the types of cars, with the types of oil, going through populated areas — is unacceptable. That’s what they’re telling us,” he said. “We ought to heed that warning and do all we can to address the problem.”