Seniors are a big part of Rochester growth 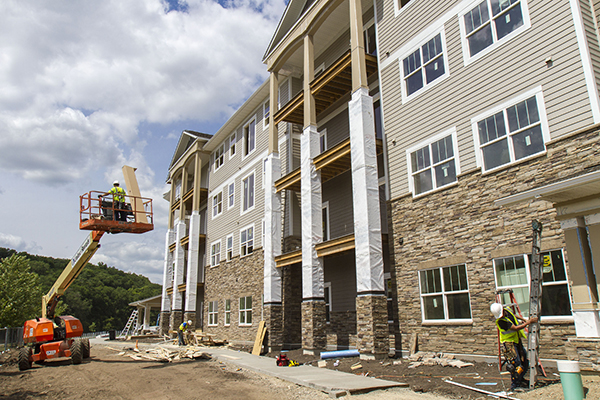 ROCHESTER — A few blocks away from the Mayo Clinic’s flagship campus, a project is underway that signals big changes ahead for the city’s housing mix.

Construction workers are putting finishing touches on the exterior of one of Rochester’s newest senior living communities. Slated to open this fall, the mixed development of assisted living apartments and a memory care unit is part of a boom in senior housing.

“As Rochester continues to grow, and it is going to grow, we all know that, and people that live and work here right now want to bring their parents,” said Sheila Nieland-Snyder, the center’s executive director. “And to have a bunch of different options for people to choose, is really, really key.”

Driving that growth is the Mayo Clinic’s 20-year, $5 billion expansion plan. It includes $327 million in state aid, largely to fund improvements to public facilities in Rochester, which is expected to gain 32,000 residents over the next two decades.

Many of the new residents likely will be seniors who are rethinking where they want to spend their golden years. Traditional retirement communities in the Sun Belt tend to attract younger, healthier retirees who are still driving, golfing and going out. But as their medical needs start to change, seniors tend to want to be closer to family, and good medical care, Nieland-Snyder said.

“We talked to a lady the other day who was here from Hopkins. And her children live here in Rochester and she’s thinking years ahead, too, thinking ‘Boy, I want to be where my children are and I know my children are going to want to stay in Rochester because they have great jobs here and there’s great potential for their children, my grandchildren here,’” she said. “So people are going to come here and retire here because it’s a great town. It’s a little town but it’s a big town and there’s so much opportunity here.”

Three other senior communities are either under construction or have announced plans for expansion in Rochester in recent months. Another plans to break ground in nearby Byron.

The new developments will add to the 44 existing senior housing developments in Olmsted County that account for 2,599 units, according to a comprehensive housing needs study released earlier this summer. By 2030, the county will need to nearly double that number to 4,244, in part to meet the demand of seniors.

Rochester has many of the advantages seniors want, said 84-year-old Jerry Barnhart, who started to rethink his own retirement in the mid-1990s, when he and his wife, June, moved from Mankato to Rochester. Even though they don’t have family in Rochester, the city was attractive, in large part because of its location, he said.

“The security of knowing there is a medical facility that is very adequate, very adequate for the needs,” Barnhart said. “And we thought this would be our final resting place for us, so to speak. And it seemed quite logical.”

The couple lives in a single family home. But June Barnhart, 90, was diagnosed with Alzheimer’s disease seven years ago.

Jerry Barnhart said living in Rochester has made his wife’s eventual transition to a memory care facility a lot easier.

“It’ll be harder for me than it will for her. Yeah, I can’t deny,” he said. “I’ll have to find some ways of filling a void. Not just one void. But who knows what that will be.”

Builders are trying to keep up with the rapidly growing demand, according to John Eischen, executive director of the Rochester Area Builders. But Olmsted County in general, and Rochester in particular, are a long ways from filling the need, he said.

Some of those facilities will be needed for people like Eischen’s own parents, who spend two months of the year in the south — but always return to Minnesota.

“You know, my folks are winter Texans, and I think there’s more of that because we have a very strong sense of family I think,” Eischen said. “And people aren’t willing to leave everything behind just to get out of Minnesota, even though with the last winter, it’s very tempting for anybody to get out of Minnesota.”