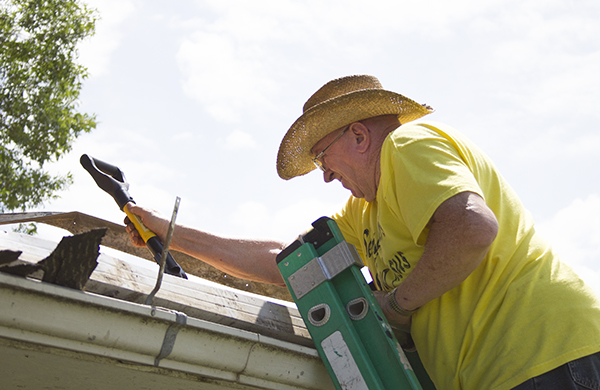 Rick Burrows works on the roof of a garage on Frank Hall Drive as part of Shinefest in August 2013. – Sarah Stultz/Albert Lea Tribune

For the past 10 years, Shinefest has been helping people around the city with the help of the faith community in Albert Lea.

Shinefest started when Albert Lea held its 150th anniversary, and the faith community was challenged to come up with a way to celebrate the city. In response, Shinefest began. 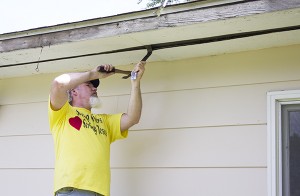 Keith Kearney works on a house on Frank Hall Drive in August 2013 as part of Shinefest. – Sarah Stultz/Albert Lea Tribune

It began with random acts of kindness, such as car washes, grocery giveaways and working at the schools.

In the last few years, Jim Troe, AZ-One board member who looks over Shinefest, said people wanted to get more involved in the neighborhoods.

Since then, Shinefest has partnered with Habitat for Humanity, the United Way of Freeborn County and the Housing and Redevelopment Authority to sponsor Rocking the Block.

Rocking the Block, which kicked off Saturday, takes a handful of houses by storm each year, doing fix-up projects in and outside of the homes. This year eight houses are being worked on, and the projects include residing, repainting, installing new windows and doors and inside repair jobs.

The homes being renovated this year are mostly between Hawthorne and East Main, Troe said. This is the third year Shinefest has been involved with Rocking the Block.

Saturday was also the community sew day, where people from the community joined forces to sew quilts to be distributed to people in the neighborhood.

Those quilts will be given away at a block parting happening this coming Saturday at Valley Park. There will be a picnic, music and family activities and all the activities are free, Troe said.

On Saturday there will be more events, all happening at the Freeborn County Fairgrounds.

For those who have signed up, there will be free oil changes from 9 a.m. to noon. To make an appointment to get an oil change, call 377-1412.

During the same time, there will be a school clothes giveaway. Troe said that people from the churches around town donated lightly used clothes to be given away to those in need.

Troe said that these events have basically been funded by businesses who sponsored signage at the disc golf courses. About 30 businesses sponsored a sign, and entered a commitment to donate $150 for three years.

And the response has been encouraging. Troe said that people were helped during last year’s Shinefest are paying it forward this year. He said that one man who was helped last year signed up to volunteer every day this year.

AZ-One, the group that oversees Shinefest, answers the question of “What can the Christian faith community do as one to bless the community?”, Troe said.

AZ-One became a nonprofit in 2007 and also oversees the Jamaica/Accompong Connection of Minnesota, the leadership summit and the Cornerstone Project.

Troe said that in the coming year, AZ-One will talk about plans to make Shinefest sustainable and to figure out a way to meet needs throughout the year, instead of one week of service in the summer.