Shirley Jones is bringing “The Music Man” to River City 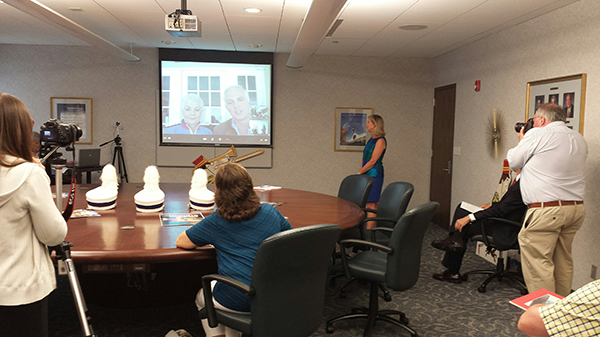 Shirley Jones and her son Patrick Cassidy are coming to River City to rehearse and premier a new version of the Broadway musical “The Music Man” in celebration of the 50th Anniversary of one of America’s favorite movie musicals.

Jones and Cassidy will co-star in the new production, “The Music Man-In Concert,” a story that gives audiences an inside look of what it was like from Jones’ point of view as she filmed the movie.

The show will be rehearsed and premiered in the North Iowa Community Auditorium on the NIACC campus before it travels throughout the Midwest on a four-week tour. Members of the cast and crew will be in Mason City for approximately one week to “tech” the show in Mason City.

“What that means is they are basically coming here to rehearse and fine-tune the set of what could be a national tour,” said NIACC Performing Arts and Leadership Series Director Elizabeth Gales, who made the announcement during a press conference at NIACC on Aug. 6.  Jones and Cassidy joined the press conference live through a Skype video.

“This is an incredible opportunity,” Cassidy said during the press conference. “It’s the dream of any leading man to play Harold Hill.”

“We are so excited. This really is an amazing opportunity for Mason City,” Gales said. “It’s not every day you have an Academy award-winning actress come to Mason City. ‘The Music Man’ is such a treasured story originating in Mason City. We know people will love this show. It will be delightful to hear Shirley Jones singing the music of our beloved Music Man once again.”

This performance will feature gorgeous period costumes, video projection, film clips and some of Broadway’s finest singers and dancers. Combining the most memorable songs and dances from this stage and screen classic, The Music Man-In Concert is composer Meredith Willson’s vintage portrait of Americana, featuring the fast talking and lovable salesman, Harold Hill, River City’s lovely Librarian, Marion, and a cast of colorful and unforgettable characters that discover and rediscover the power of music and romance.

Academy Award-winner Shirley Jones was one of the movie’s original stars. Her backstories, both past and present, of this American classic, combined with a wonderful score including “Trouble,” “76 Trombones,” “Lida Rose” and “Til There Was You,” guarantees a very special event you won’t want to miss.

The show will include a cast of singers and dancers that travel with the production group as well as several local people. Local talent will come from students at NIACC, Mason City High School band and choir, Stebens Children’s Theatre and local professional musicians.

“This promises to be a special evening with our community and a wonderful celebration of the 50th anniversary of The Music Man,” Gales said.

“We have so many surprises in store for you,” Cassidy said. “It will be an incredible evening.”

Early ticket sales are available Aug. 8-19 for sponsors and season ticket holders of the NIACC Performing Arts and Leadership Series and supporters of Music Man Square.

Tickets for the general public will be available beginning Aug. 21. All tickets can be purchased online at www.niacc.edu, at the NIACC Box Office, located in the NIACC business office, between 9 a.m. and 4 p.m. or by calling the box office at 641-422-4188.