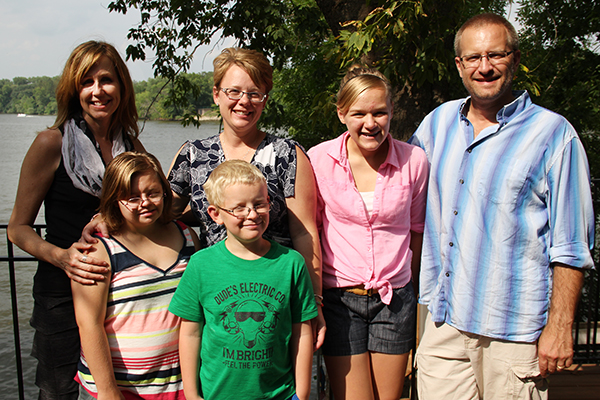 San Francisco singer Staci Frenes, top left, stands with the Schei family on their back deck in Albert Lea last Sunday. In back from left are Frenes and Rachel, Maddie and Jeff Schei. In front are Becca and Josiah Schei. — Sarah Stultz/Albert Lea Tribune

A singer with music featured on several television shows traveled to Albert Lea last weekend to raise money for a local ministry’s trip to Honduras.

Staci Frenes of San Francisco has produced music for almost 20 years and has had songs featured on “The Biggest Loser,” “Nashville,” “America’s Next Top Model,” and “All My Children,” to name a few.

Frenes, who has released eight CDs, performed a 45-minute house concert in the backyard of Jeff and Rachel Schei on Park Avenue. The Scheis formed Shy Ministries and hope to take a trip to Honduras in January to help children there with special needs.

Frenes, who is also an artist for World Vision — an international relief aid agency that works in more than 100 different countries — is used to traveling around the country and even the world to perform. She was planning a trip to Minnesota anyway because her record producer lives here.

“I thought this was a really cool thing for me to pair with,” Frenes said.

As the mother of 16-year-old Becca, who has Down syndrome, Rachel Schei said she has a special connection to the families in Honduras with special needs children.

She said when her family and the others on the team first went to Honduras, they discovered that many of the children there with special needs were not attending school, and many of the parents did not know there were others in a similar situation in the community.

The team, which included occupational therapists, first met with the families of these children in their homes and then organized a time for all of the families to meet together.

“For them to be able to talk to a group and have that opportunity was amazing,” said Schei, an occupational therapist herself. “Just seeing the looks on their faces, they were so grateful to know each other.”

They have since formed day camps for the children to attend and hope to operate another day camp during the next trip.

She said she and her husband have heard positive reports of the families they have worked with, noting that there has been significant progress in many of the children. Many have also been seen doing more in the community.

They hope to see this continue.

People interested in giving to the cause can mail contributions to Shy Ministries at First Baptist Church, P.O. Box 149, Clarks Grove, MN 56016.