Stella Delores Langlie, 85, died at New Richland Care Center Tuesday, Aug. 26, 2014. Funeral services for Stella will be at 11 a.m. Friday at First Lutheran Church in Ellendale. The Rev. Richard Sliper will officiate. Visitation will be from 5 to 8 p.m. today at the church and one hour prior to the service. Interment will be in First Lutheran Cemetery in Ellendale. 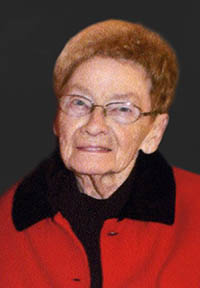 Stella was born at home in Albert Lea to Arthur and Nellie Clementson Nov. 18, 1928, along with her twin sister, Helen. She has been a lifelong resident of the area, moving to Ellendale when she married Eugene Langlie April 15, 1950. They were members of First Lutheran Church, and Stella helped with the ladies aid. She was a homemaker and enjoyed gardening, baking cookies, cooking, reading, knitting, sewing and making doll clothes, shopping with family, collecting peacocks and making her daily drive to Ellendale Cafe for socializing with friends over a cup of coffee. She also enjoyed going up north to Bear Paw many years with family and friends. In recent years, Stella has been living at Whispering Oaks.