Tabata workout is offered at the Albert Lea Family Y 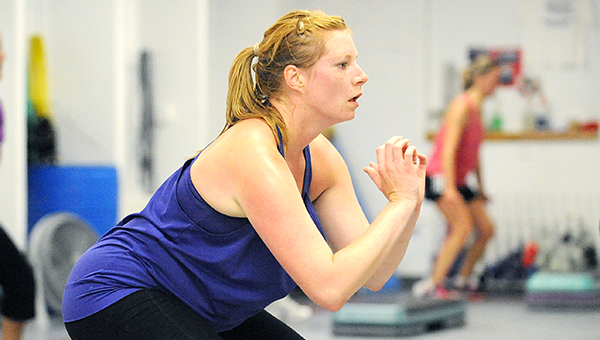 Named after the Japanese professor Izumi Tabata, who researched a style of high intensity interval training while working with Japan’s Olympic speed skating team, Tabata involves a “rotation of short bursts of maximum effort followed by short periods of rest,” according to Tabata on Ritsumeikan University’s website. 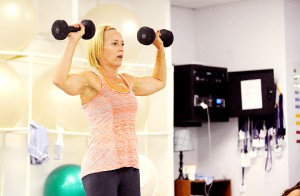 Lee Wiese lifts dumbbells during a break between Tabata exercises July 28 at the Albert Lea Familiy Y. Wiese has working out at the Family Y for over 25 years. — Jacob Tellers/Albert Lea Tribune

The Family Y’s website said that the workout “aims to improve both our aerobic and anaerobic capacities in one workout.”

Williams has been running a Tabata class at the Family Y since January. She began instructing in December, but she has been utilizing the Family Y much longer.

“I’ve been coming here for years, but I just started teaching,” said Williams.

Williams led by example and joined in on all the exercises.

“It’s fun to get everyone together and to have all the energy and all the people versus working out on your own,” Williams said.

Lee Wiese has come to the Family Y for 25 years since her first son was born, and she has participated in the Tabata program as long as it’s been available.

Wiese said the intensity is what she enjoys most because it’s a way to get low-impact exercise.

“I can’t run because of my knees,” Wiese said. “So I can get intense cardio this way.”

The ability to have a complete workout is one of the draws of Tabata.

“In general there were two types of exercises, low-intensity exercises for longer periods of time that improved endurance, and exercises such as sprints that improve your ability to sprint, but have no effect on aerobics or endurance,” Tabata said on Ritsumeikan University’s website. “In contrast, the Tabata Protocol draws on the advantages of each.”

Kim Wangsness has attended Tabata classes since 2008, when Williams convinced her to try it.

“It was hard at first, but fun,” Wangness said. “What I enjoy most is how I feel after the workout.”

Emily Solum attends the Tabata classes to get in shape for dancing at Just for Kicks.

The Tabata class meets for 45 minutes at the Family Y at 9:05 a.m. on Tuesdays and 9:30 a.m. on Thursdays. The class is free for members with a cost of $28 per session for non-members.