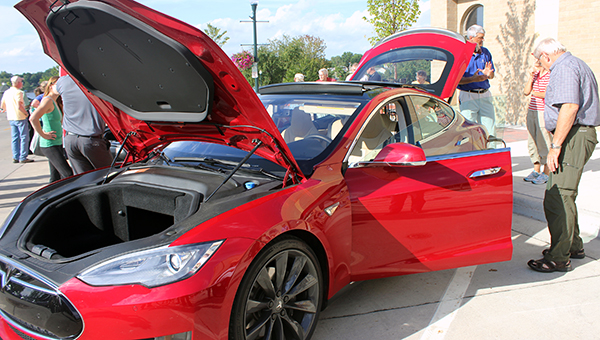 A look to the future

It was a look into the future Wednesday in downtown Albert Lea as area residents got the chance to check out the cutting-edge technology behind Tesla Motors electric cars.

As part of an event in front of ISC Financial Advisors, three cars were available for public viewing, including one that was used for test drives. 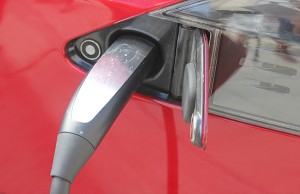 The Tesla Motors vehicles in Albert Lea Wednesday could run more than 200 miles on a charge. – Sarah Stultz/Albert Lea Tribune

“I think it’s awesome,” said Greg Iverson, who was in town with his wife, Alice, from Clear Lake. “It’s probably the way the industry is going to be forced to go.”

The Iversons, who drive a Toyota Sienna van, said while the cheaper of the Tesla Model S cars are probably twice as much in cost as their present automobile, they pointed to the savings in gasoline costs. They said they would highly consider purchasing one when there are more super chargers installed across the country.

Ashley Vaness, ownership adviser with Tesla Motors, said the cars can run up to 265 miles on a single charge, based on the battery.

The batteries can charge on a 240-volt outlet, often found in garages, overnight in nine hours or through a super charger — like the ones at the AmericInn on the north side of Albert Lea. She said through the super charger, the battery can get half the total charge in 20 minutes.

Vaness said the motor is the size of a watermelon and is between the back two wheels. When you open the front of the car — where a motor is typically housed — there is nothing but storage space.

The batteries are along the bottom of the vehicles. 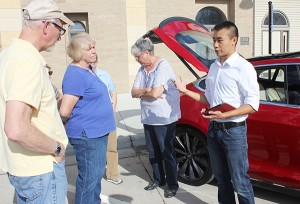 Vaness said without a transmission, there is instant response when driving. The cars can be warmed or cooled ahead of time from a phone.

Dave Wolter, one of the several people checking out the cars, said he was impressed with what he saw.

He liked the fact that you wouldn’t have to put gas in the car.

Staff of ISC Financial Advisors served cookies and punch. Many of the people came from Wind Down Wednesday to check out the cars.