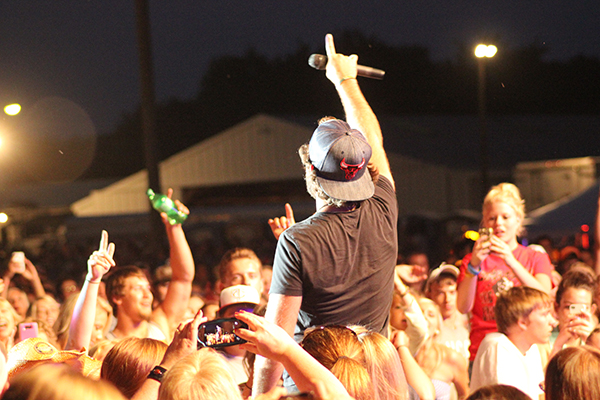 After Grandstand attendees got pumped up with lights and loud music, Thomas Rhett came out on stage, bursting with energy. The 24-year-old country star opened his Thursday night performance with “Middle Class White Boy,” capturing the crowd from the get-go.

After saying hello to the crowd, Rhett then went on to sing “Whatcha Got in that Cup.”

“Man, it feels good to be here,” Rhett said.

He then went on to sing his newest radio single, “You Make Me Wanna.” Rhett received a mix of both cheers and jeers when he asked the crowd if there were Minnesota Vikings or Green Bay Packers fans present at the show.

Rhett laughed at the response and told the crowd, “We’re gonna sing a little song that y’all know.”

The crowd then sang along with Rhett as he performed “Friends in Low Places” by Garth Brooks. Rhett also pulled three audience members up on stage to sing the third verse of the song with him. The three men he brought up danced for the crowd as Rhett sang a part of “Country Girl Shake it For Me.”

Rhett made sure the audience was fully involved in his show, encouraging dancing and teaching the chorus of “Front Porch Junkies” to the crowd. At one point, Rhett even became a part of the crowd when he wandered off stage during his rendition of Lee Brice’s “Parking Lot Party,” which included parts of “Dust on the Bottle,” “Beverly Hills” and “Free Fallin.”

Rhett also performed one of his current top songs, “Gimme Some of That,” and his first No. 1 song as a writer, “Round Here,” which was recorded by Florida Georgia Line.

“It gets so quiet after every song,” Rhett said. “It kind of cracks me up.”

Rhett then slowed down the show to sing his second song he had put out as an artist, “Beer with Jesus,” and had a phenomenal performance of his first No. 1 song as an artist, “It Goes Like This.”

Rhett’s energetic personality came right back when he fired T-shirts to the crowd with a T-shirt gun.

“I bought this off some guy at some fair,” Rhett joked.

Rhett closed his show with “Something To Do With My Hands” and was cheered back on stage for an encore.

He then finished the night off with “1994,” a song he wrote for Jason Aldean. Fans were able to meet with Rhett after the show at his merchandise table. 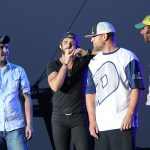 Thomas Rhett talks with the three men he pulled from the audience to help him sing the third verse of “Friends in Low Places.” – Erin Murtaugh/Albert Lea Tribune 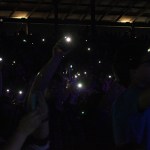 The crowd held up cell phones and lighter’s during Thomas Rhett’s performance of “Beer with Jesus.” – Erin Murtaugh/Albert Lea Tribune 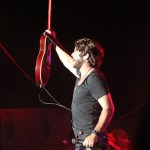 Thomas Rhett raises his guitar at the end of his performance on Thursday evening. – Erin Murtaugh/Albert Lea Tribune 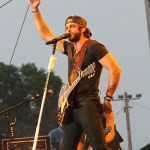 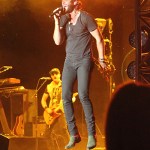 Thomas Rhett jumps while singing “Something To Do With My Hands.” – Erin Murtaugh/Albert Lea Tribune 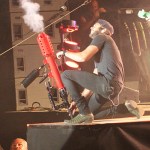 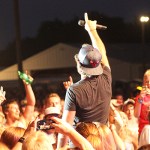