Tilmer S. Hanson, 97, of Medford died Sunday, Aug. 17, 2014, at Pleasant Manor Care Center in Faribault. Visitation will be from 4 to 7 p.m. Thursday at Brick-Meger Funeral Home in Owatonna and one hour prior to the funeral at church. Funeral services will be at 11 a.m. Friday at St. John Lutheran Church in Owatonna with the Rev. Dave Klawiter officiating. Interment will be in Owatonna Memorial Gardens with military honors provided by the Steele Co. Military Funeral Detail. 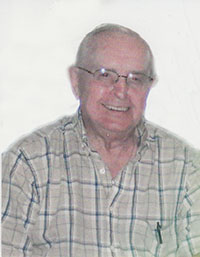 Tilmer was born Jan. 29, 1917, in Blue Earth to Nels and Olga (Erdahl) Hanson. He attended country school in Faribault County. Tilmer served honorably in the United States Army Air Corp from 1942 to 1946. He was stationed in the South Pacific and Australia.

Tilmer and Ella Ulrich were married in Dodge Center March 30, 1946. Following marriage the couple made their home in Albert Lea. Tilmer worked for Albert Lea Electroplating Co. for 34 years prior to his retirement in 1985.

Following retirement, the couple traveled the U.S. in their motor home until 2000 when they settled in Medford. Tilmer was a member of the VFW, American Legion, Eagles Club and St. John Lutheran Church. Tilmer and Ella enjoyed traveling and dancing.  Survivors include his wife, Ella, of Medford; his daughter, Sandy (Gary) Hareid, of Emmons; his daughter-in-law, Sue (Gene) Hanson Lieser, of Circle Pines; four grandchildren; eight great-grandchildren; his brother, Marlyn Hanson, of Buffalo Center, Iowa; and nieces and nephews.

Tilmer was preceded in death by his son, Terry, in 1997; two sisters, Hannah Toquam and Norma Bilau; two brothers-in-law, Clifford Toquam and Art Bilau; and a sister-in-law, Dorothy Hanson.

Memorials are preferred to St. John Lutheran Church. Condolences may also be expressed at www.brick-megerfuneralhome.com.