Carolina Torres of Bogota, Colombia, and Daniel Frame of Wahpeton, N.D., were married at 5 p.m. May 31, 2014, at Itasca State Park near Park Rapids in an outdoor double ring ceremony. A reception followed at the Ozawindib Group Camp in Itasca State Park. 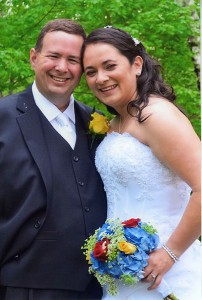 The bride is the daughter of Bernardo and Cristina Torres of Bogota.

The groom is the son of David and Claire Frame of Albert Lea and the grandson of Jeanette Wanstrom of Fairfax.

The bride graduated from the National University of Colombia in Bogota and received her master’s degree in Spanish literature from Minnesota State University, Mankato.

The groom is a graduate of Albert Lea High School and North Dakota State University in Fargo, N.D., with a degree in science education.

They are both employed by the Wahpeton School District.

Bridesmaids were Sydney and Morgan Koppelman of Park Rapids and Annika Willmert of Shakopee, all nieces of the groom.

The best man was Sam Willmert of Shakopee, nephew of the groom.

Readers were Lisa Frame-Koppelman of Park Rapids and Jennifer Willmert of Shakopee, sisters of the groom.

Ushers were Ben Koppelman of Park Rapids and Mark Willmert of Shakopee, brothers-in-law of the groom.

Music was provided by Don Bajumbaa and Alicia Odens, friends of the couple.

A wedding trip to Colombia, South America, with visits to the Amazon and San Andres Island was taken in July, and the couple now resides in Wahpeton, N.D.