Jessica Vano of Albert Lea and Nicholas Anderson of Tomah, Wis., were married at 10:30 a.m. Aug. 17, 2014, at Zion Lutheran Church in a double ring ceremony. 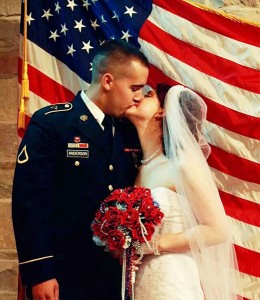 The bride is the daughter of the Rev. Joel and Judy Vano of Albert Lea.

The groom is the son of Todd and Joan Anderson of Tomah.

The bride is currently attending Concordia University in St. Paul and is employed by Payless Shoes in St. Paul.

The flower girl was Alexis Thalken, daughter of Greg and Melissa Thalken, of Jackson.

The ring bearer was Carter Anderson, son of Josh Anderson, from Tomah.

Musicians were Dan Petrich, Mariah Hoffman and Gina Marchetti, friends of the couple, from Concordia University in St. Paul.

The personal attendant was Jordyn Messing, friend of the couple, of St. Paul.

An afternoon reception took place at the Fairlane Building at the Freeborn County Fairgrounds.

A wedding trip was taken Aug. 18 through 25 to Deadwood, S.D., and the surrounding area.