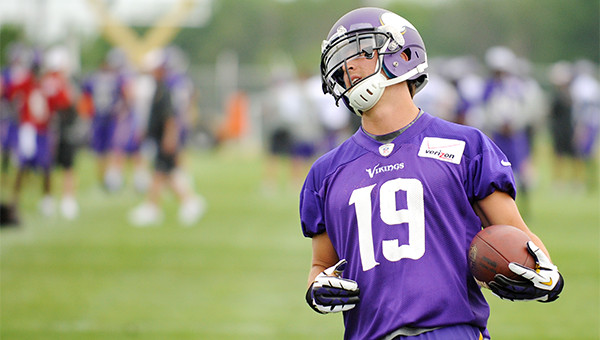 Adam Thielen of the Minnesota Vikings runs past defenders during a drill on the first day of training camp July 25 at Minnesota State University, Mankato. — Micah Bader/Albert Lea Tribune

In the first preseason game for the Minnesota Vikings, the second-year wide receiver showed some elusiveness with three punt returns for a total of 52 yards.

The moment that might have solidified his spot on this team, though, came during a punt at the end of the first half Friday against Oakland. Thielen played the protector position and sprinted down the field to slither around a blocker and tackle Raiders returner Denarius Moore for a 4-yard loss.

“We’ve got a saying around here: ‘The more you can do,”’ coach Mike Zimmer said.

“Whatever they ask. I’m going to try to give it my best ability in whatever they want me to do,” Thielen said.

With his average size and undecorated background, Thielen has become a fan favorite around the facilities at Minnesota State University. That starts, of course, with the fact that he went to school here, parlaying a standout career with the NCAA Division II Mavericks into a spot on the practice squad last season with the Vikings. He’s a native of Minnesota, too, raised in Detroit Lakes about 200 miles northwest of the Twin Cities.

Zimmer called Thielen the “superstar” of Mankato, this riverside college town on the edge of the prairie.

“He’s a guy that has a lot of toughness, a lot of heart. He wants to make the football team, and he’s giving his best effort to do it. You can win a lot of football games with guys like him.”

Thielen’s friend, roommate and fellow wide receiver Cordarrelle Patterson has a spot all sewn up. He’s the first-round draft pick from last year and kickoff returner extraordinaire whom the Vikings have been trying to build much of their offense around. The 6-foot-2, 195-pound Thielen would only be kept for depth and special teams, so he’s naturally unsatisfied with his status.

“I’ve been trying to give him confidence, but he just feels like he’s not part of this team, man,” Patterson said. “I tell him every day, ‘Man, you’re a part of this team,’ and he’s still saying, ‘I’m not. I’m not, man. I’ve still got to go in and prove myself.’ But you need that out of a guy, man, feeling like you’re not a part of this team. It’s just making him work harder.”

Cornerback Marcus Sherels is the incumbent punt returner, and he was held out Friday because of a hamstring injury. Special teams coordinator Mike Priefer said Sunday he expects Sherels to keep that job for the start of the regular season.

“Obviously he’ll feel a little bit of a pressure from Adam or any other young returner, but Marcus is a guy that we’ve relied on heavily the last three years and we’ll see him have continued success, I hope,” Priefer said.

Thielen, then, must continue to prove his worth in other ways.

He’s comfortable enough, though, to threaten Patterson about taking his nickname.

“He tried to call himself ‘Mankato Flash.’ He’s trying to steal my name and stuff, you know. But he’s a great guy, man,” Patterson said. “At the end of the day, man, hats off to Adam. I know he’s going to make this team.”

Patterson, keeping his general manager hat on for another moment, said he and other veteran players agreed that Thielen should have made the active roster last year.

“He’s my good buddy, so of course he’s going to say that. Everything happens for a reason, and I wouldn’t trade anything for last year,” Thielen said. “I learned a lot of stuff from those guys and was able to watch how they prepare and the way they play, and I’m taking a lot of that stuff with me.”