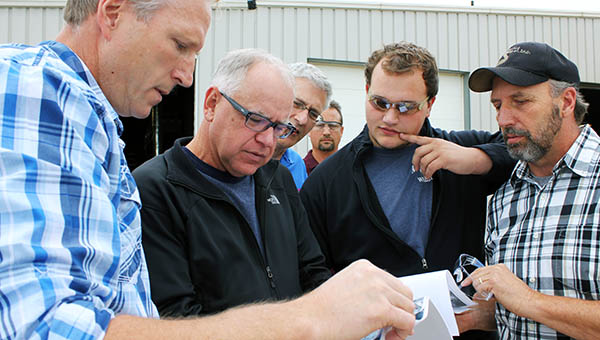 Manufacturing is making a comeback.

Walz, DFL-Mankato, said he thinks there’s a sense of optimism among manufacturers,  but he recognizes there are things that can be done to improve the climate for them.

He talked about everything from needing increased job force training to changing hours of service rules for trucking operations to making changes in requirements for young truckers.

He said many manufacturers are having a problem finding skilled workers to fill available positions.

“While that’s a good problem to have, it’s still a problem,” Walz said.

Tom Bunz,  operations manager for Pro Manufacturing, said the company has 28 employees,  eight of which are new hires.

Bunz said many of their workers need welding skills, and there’s a competition for welders in the region. He and Walz agreed on the need to teach these skills in schools and colleges.

Bunz and other Pro Manufacturing and Pro Trucking leaders gave Walz a brief tour of the business,  showing the congressman some of the company’s projects.

John Hausladen, president of the Minnesota Trucking Association, encouraged Walz to support a long-term federal highway bill so that private businesses and local governments can have predictability in making investment decisions.

He also talked about the difficult time the trucking industry has in recruiting qualified drivers,  particularly those who are younger, and the need for a change in regulation limits for younger drivers.

Walz will face off against Republican Jim Hagedorn of Blue Earth in the November general election.