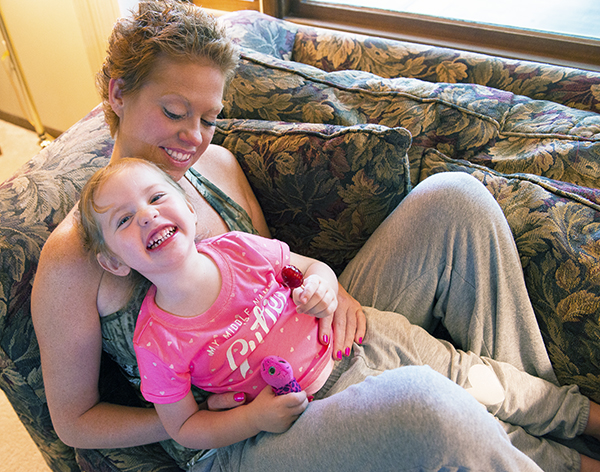 On Sept. 28, 2013, one of Katy Zuehl’s worst fears was realized. At the age of 31 she was diagnosed with invasive ductal carcinoma, more commonly referred to as breast cancer.

Zuehl, now 32, said she originally scheduled an appointment with her doctor at Mayo Clinic Health System of Owatonna after finding a small lump in her breast. Her doctor did a few different tests and, with her good health and family history, told her it was most likely “nothing to worry about.”

When the same doctor called Zuehl to discuss the results a few days later, at 7 p.m. on a Friday, she knew that wasn’t the case.

After the initial shock, Zuehl said her first thoughts went to her daughter, Parker Lund, who was roughly over a year old at the time. She had genetic testing done as soon as possible to make sure that the cancer wasn’t a genetic trait she could have passed onto her daughter.

Following the testing came the lumpectomy, where Zuehl said the doctors found more cancer cells than they had originally anticipated. She opted to go to Mayo Clinic Health System of Rochester for treatment, as she had heard of its nationally renowned cancer treatment center. 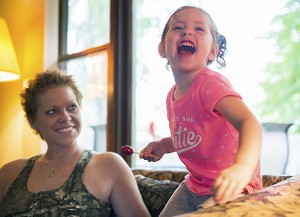 One of Zuehl’s first concerns after being diagnosed with breast cancer was that it could genetically be passed down to her daughter. She underwent genetic testing to make sure that was not the case. — Colleen Harrison/Albert Lea Tribune

According to both Zuehl and her mother, Kathy Aase, Mayo Clinic was very thorough in presenting them with not only options but other research and statistics so that they could feel more comfortable making an educated and informed decision. When discussing possible treatment options, including radiation, Zuehl and her mother met with an oncologist whose daughter had gone through a similar battle.

It was shortly after that Zuehl and her doctors elected to pursue a double mastectomy. Before surgery, though, she would have to undergo chemotherapy.

Chemotherapy was essentially putting Zuehl through early menopause, according to Aase. She’d have Aase or other family or friends with her for appointments as the treatments sometimes impaired her memory.

Her first round of chemotherapy was Dec. 6, 2013. Every day after her treatments for the first two months, Zuehl had to go in to get a shot of Neulasta, a drug meant to boost her white blood cell count after the chemotherapy killed off the cells. Her last three months of chemotherapy used the drug Taxol to treat the cancer cells, and her last round was April 29.

She said her chemotherapy sessions would sometimes have to be pushed back if she was too sick or if her white blood cell count was too low. Following her first few chemo treatments she’d spend up to seven or eight days in bed, extremely tired and sick.

Zuehl said she’d sometimes stay with her aunt in Dover during her chemo treatments as it was closer to Rochester. She grew up in Albert Lea, but she and her daughter currently live with her mother and stepdad in Faribault.

Zuehl was attending Riverland Community College at the time of her diagnosis and had completed the trained medical assistant program. Since the diagnosis, school and work have been put on hold, making it impossible for Zuehl to live on her own.

On May 28, Zuehl underwent a skin-sparing double mastectomy. The procedure lasted 10 hours, partly because Zuehl said she had complications with the anesthesia.

She said one of the hardest parts of the ordeal was losing her hair.

“You go from having that as part of your identity to it being gone,” said Zuehl. “Your hair, eyelashes, eyebrows, everything.”

Zuehl said she found a “Look Better, Feel Better” class at Riverland that taught her how to apply makeup after the loss of eyelashes and eyebrows and how to wear different scarves and wigs after hair loss. She said there was also a “Living with Cancer” class that helps those diagnosed to continue living their lives both during and after cancer.

Zuehl’s advice to others going through similar ordeals is to “stay positive and stay strong. Surround yourself with a support group.”

Staying positive was something she said she struggled with at times. Zuehl lost both her grandmother and a close friend right around the time she was first diagnosed.

“You have to take it day by day,” she said. “I didn’t try to look too much into the future knowing I had cancer.”

For Aase, it was extremely difficult watching her daughter go through everything.

“I was torn apart,” she said. “I tried to contain my fear, because I didn’t want to scare her.”

Both Aase and Zuehl said that a strong sense of faith has sustained them both throughout everything.

“We have a strong faith support system surrounding us,” said Aase. “Prayer is everything. That was everything. It’s been a journey.”

Aase said her daughter had to work hard to keep a positive frame of mind, through rough emotional days to days where everything just didn’t seem to work out.

“Katy has had an amazing outlook,” she said. “She’s so strong and courageous. I’m so proud.”

As of June, Zuehl is cancer free. In the coming year she has reconstructive and cosmetic surgeries lined up.

There will be a benefit for Zuehl from 4:30 to 9 p.m. Friday at the Fairlane Building in the Freeborn County Fairgrounds. The event benefits Zuehl’s medical and living expenses that have accrued since her diagnosis. An account has been setup at US Bank on her behalf, under The Katy Zuehl Benefit Fund.

Aase called the benefit “a celebration of life.”

“Yes, cancer is scary,” she said. “But, it doesn’t have to be consuming. There’s hope.”