Albert Lea’s freeway stop is unlike any other in Midwest 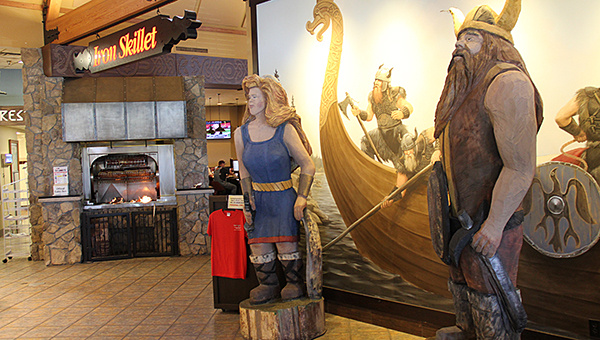 Vikings Ole and Lena and a viking mural greet customers to Trail’s Travel Center near the entrance to the Iron Skillet restaurant. Nearby is a wood-burning rotisserie. – Tim Engstrom/Albert Lea Tribune

In 1998, Trail’s Travel Center went from being just another truck stop on Interstate 35 to being a tourist attraction.

The Norwegian-themed building was opened that year on about 24 acres on the southeast side of Interstate 35’s Exit 11, having moved where a Shell station now exists on East Main Street.

Trail’s Travel Center, 820 Happy Trails Lane, comes in at No. 18 on the Tribune’s list of favorite places of Albert Leans.

The average number of people who stop at Trail’s Travel Center each day is a company secret, said Dustin Trail, a member of the owning Trail family. The travel center offers travelers — or those taking overnight breaks from traveling — choices: snacks, fast-food, dessert, a bar and sit-down dining. There is also a truck service center for the big rigs, and truckers can take advantage of showers, a big TV theater, a chapel, laundry service, scales and a truck wash.

Inside its 28,475 square feet of space, it has McDonald’s, Cold Stone Creamery, Pizza Hut, Iron Skillet and Skol Tavern. There is even a bakery, a gift shop and, of course, a convenience store.

The fuel provided used to be a TA Travel Center but that changed in 2012, when it switched to Petro and opened the Iron Skillet. It was the same company, just a different brand.

“A lot of people think that we were sold,” Trail said. “We are still a family-owned company that is locally owned.”

Iron Skillet has rotisserie meats, family-style food and still has broasted chicken, just like when the restaurant was called Trail’s Restaurant. Like in past years, a big buffet is planned for Thanksgiving.

The Skol Tavern was added in 2012 and is like an airport bar, where people from a variety of places meet and enjoy each other’s company. Most patrons are not getting back on the road. Truckers sometimes have to wait a couple of days to deliver or pick up loads.

A mural of vikings in a ship by the entrance near the Iron Skillet was painted by James Lundberg and hung in May 2013. Nearby stand two large vikings carved of wood. The man is named Ole, and he was carved at the grand opening in 1998. The woman is named Lena. She was carved in the parking lot a few years later during trucker jamboree.

Trail said the location is a draw for I-35 travelers but he markets toward I-90 travelers, too.