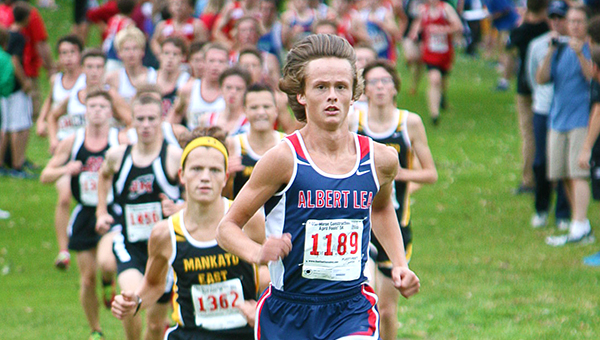 The Mankato West Invitational on Tuesday at Minneopa Golf Course marked the third straight first-place finish in eight days for Albert Lea cross country runner Jackson Goodell and the third straight meet the Tigers finished inside the top five as a team.

“We came through this tough stretch with a great deal of confidence that we will be a factor in the big meets in October,” said Albert Lea coach Jim Haney. “We will work almost exclusively on speed in the coming days to help move our times further down.”

Goodell crossed the finish line in 15:59.7 to meet his goal of breaking 16 minutes, Haney said.

“It was a great accomplishment for him and a tribute to his teammates who keep pushing him at every practice,” Haney said. “Jackson took over the race with a half mile to go and would not be stopped, winning by about 20 seconds.”

“Caleb has been consistent all season long, and we couldn’t be where we are without his efforts,” Haney said.

Jay Skaar followed in 12th place, Nikk Christianson was 23rd and Herbie Lein was 25th. Each member of the trio broke 18 minutes.

The Tigers took second place in the seven-team field with a score of 68, while Chanhassen won with a 29. That follows a fifth-place finish Saturday out of 16 teams at the Jim Flim Invitational in Winona and a first-place finish Sept. 15 at the Fairmont Invitational.

The Albert Lea girls’ team was led by Haley Harms, who took sixth place with a time of 15:50.0.

“She has stepped up her running and become someone the other runners look to for guidance on some of the tough courses,” Haney said. “Haley took charge early.”

“The girls were able to pack up again — all five of the scoring runners were within 40 seconds of each other,” Haney said. “It was an excellent effort, and the coaching staff is proud of them.”

The Albert Lea girls’ team finished fourth out of seven teams but was only 28 points out of first place.

Next, Albert Lea will compete at 5 p.m. Oct. 2 at Brooktree Golf Course in Owatonna.