Angela Marie Lenort, 43, died Wednesday, Sept. 24, 2014, in Rochester. Funeral services for Angela M. Lenort will be at 11 a.m. Monday at Emmons Lutheran Church. Visitation will be from 4 to 7 p.m. Sunday at Bonnerup Funeral Service in Albert Lea and one hour prior to the service at the church. The Rev. Christopher Martin will officiate. Interment will be in Oaklawn Cemetery in Emmons. 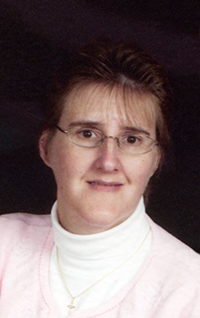 Angela was born on Aug. 9, 1971, to Hans and Judy (Sundve) Jensen. She has been a lifelong resident of Freeborn County and active member of Emmons Lutheran Church. She graduated from Alden High School and went to Hutchinson Vocational Technical College for two years. During her career as a certified nursing assistant she worked at Woodvale and St. John’s Lutheran Community.

On June 6, 1998, Angela was united in marriage to Dunnell Lenort at United Church of Christ in Freeborn. Angela enjoyed country music and was in the Sawyer Brown Fan Club. She enjoyed candles, spending time with her cat, Toby, staying active on Facebook and spending cherished time with family.

Angela was preceded in death by her grandparents Hilmer and Esther Jensen and Casper and Darlene Sundve; uncles Ken Sundve and Ronald Sundve; and brother-in-law, Ken Wilson.