Autumn in the Village to return with activities, demos and food 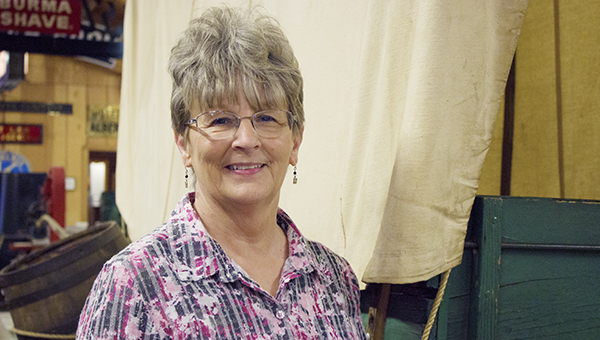 Since the early 1990s, the Freeborn County Historical Museum has given people a chance to go back in time, at least for four hours.

Autumn in the Village is coming again from noon to 4 p.m. Sept. 21.

Pat Mulso, museum director, said that Autumn in the Village is the museum’s largest event of the year. She emphasized that a family could easily spend the entire afternoon there. 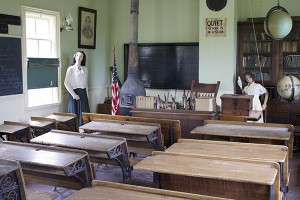 Desks are lined up neatly in the village’s school, where children can do activities such as quill pen writing. – Hannah Dillon/Albert Lea Tribune

There is an abundance of demonstrations and activities to do at Autumn in the Village. For children, there is quill pen writing in the school, an archeological dig, old-time photographs at the photo shop and old candy for sale at the general store, among others. There will also be wagon rides through the fair grounds, Mulso said.

There will also be spinners and weavers, hardangers, embroiderers, woodworkers, corn shellers, ropemakers, broommakers and rugmakers. There will be demonstrations of some of these trades occurring throughout the event.

From 2 to 3 p.m. there will be square dancing inside the museum, something that was new last year, Mulso said. The Genealogical Society will also be at the event to help people interested in looking up their family’s past.

Mulso also stressed that people are welcome to look around the museum, especially at their new exhibits such as the Indian artifact exhibit and the Scotsman Ice Machine exhibit.

There will be music at the event as well as food served all afternoon. The food was donated by Hy-Vee, Mrs. Gerry’s and Trail’s Travel Center, Mulso said.

Some of the food served will be sandwiches, chips, pie and ice cream, and Mulso said one of the most popular food items is the sarsaparilla.

Mulso said that Autumn in the village has been going on since the early 1990s. This year the museum received supplemental funding for the event from the Albert Lea chapter of Thrivent Financial.

The children’s activities are always popular, and some of the older visitors enjoy the demonstrations, Mulso said. The food is always huge and Mulso said people like to sit at picnic tables and visit with friends.

She said older people also spend a lot of time reminiscing and sharing their experiences.

There are some new hands-on activities this year, Mulso said, but she wasn’t sure which ones were going to be included. She also said they may have some new vendors.

One big new thing in the village is that the red barn is being cleared out to showcase the exhibits inside. Mulso said it was used as storage, but since there is more room in the museum, the storage is being moved to show the farming and machinery exhibits.

Mulso stressed that the event takes hundreds of volunteer hours for a four-hour event, and she thanked her volunteers, the community’s support and all the donations the event has received.

What: Autumn in the Village