The funeral service for Bernice M. O’Neal of Albert Lea will be at 11 a.m. Thursday at First Lutheran Church in Albert Lea. The Rev. John Holt will officiate at the service. Interment will be in Graceland Cemetery of Albert Lea following the service. Visitation will be from 5 to 7 p.m. Wednesday at Bonnerup Funeral Service, and also one hour before the service at the church. Bernice died Saturday, Sept. 20, 2014, with family at her bedside at St. John’s Lutheran Community in Albert Lea. Bernice was 96. 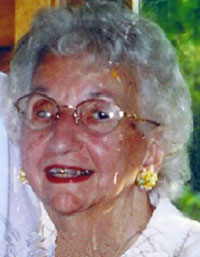 Bernice “Beans” was united in marriage to Leo E. O’Neal on March 20, 1937, in Northwood and was married for 67 years. Bernice was a wife, mother, grandmother and great-grandmother.

Bernice was a member of First Lutheran Church where she taught Sunday school for several years, was always a member of mission circles and for many years helped make lefse for the Holidays Ahead event. She was an avid bowler and for 50 years was a member of the Albert Lea Early Bird League, and — for almost as many years — a member of the Thursday afternoon Women’s Bowling League. In 1994, Bernice won the Minnesota State Senior Women’s class H (over age 75), Bowling Championship.

Bernice loved her Norwegian heritage. Every holiday season she made numerous dozens of lefse for her family with help from her sister, Elfie, and her sister-in-law, Verna Gilbertson. She always looked forward to the annual lutefisk dinners in Blooming Prairie and Emmons. Bernice enjoyed spending time with family and friends, playing card games, flower gardening, cooking, canning vegetables and all the fishing trips, with family and friends, where she and Leo traveled to many lakes in northern Minnesota and Canada. She especially liked catching walleye. Bernice was very competitive. Whenever the family got together there was always a card game of Shanghai. “Hokey pokey” was her good luck phrase.

Bernice was a wonderful family-oriented lady, who enjoyed having everyone for family gatherings, always had the most positive attitude on life and was a great example of “wifedom” and motherhood. Her four-plus years spent at St John’s Lutheran Community was filled with being a part of the Gutter Grannies, a competitive group of Wii bowling ladies, and they had so much fun competing with the Oak Park ladies. Playing bingo was also a fun time for her. The Second South staff of St. John’s Lutheran Community were extremely kind and caring. The family would like to thank them for the love and special care she received.

After a long life, Bernice has gone to her eternal home, and she will be sadly missed by her loving family and friends.