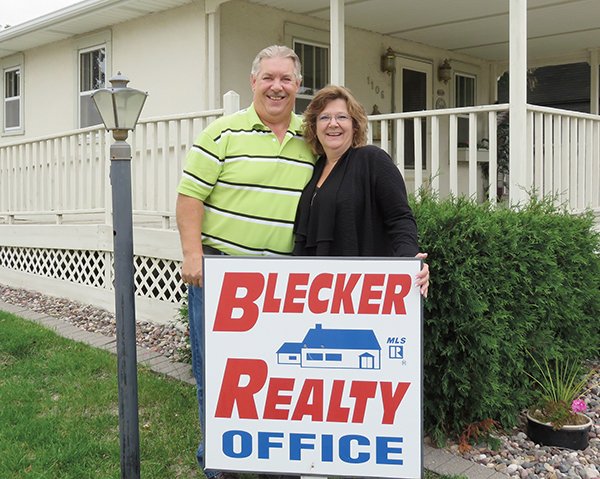 After more than 20 years in the business, Brian and Beckie Blecker are closing Blecker Realty and moving to Wisconsin.
– Provided

Owners plan to move to Wisconsin

AUSTIN — After two decades, a business common to Mower and Freeborn counties is about to close as its owners ready to move on to a new adventure.

Brian and Beckie Blecker, the couple behind Blecker Realty, announced their plans to close their real estate business and buy Bellinger Sportsman’s Bar in Bellinger, Wis.

“It’s been 20-plus years in this business, and we just decided it’s time to try something new,” Beckie said.

The Bleckers plan to close to new customers on Tuesday, but they won’t leave for Wisconsin until the end of October after all their clients’ sales have closed.

“We will see everybody to the end of their transaction,” Beckie said.

The business opened in Albert Lea in 1993 and moved to Austin about 12 years ago. The Bleckers own a cabin in northern Wisconsin, which will be about two hours from their new home in Bellinger. For several years they’ve stopped at small towns between their cabin and Austin, where they’ve met several people who’ve moved from Milwaukee or Chicago to run a business for a slower paced life.

“It was kind of a dream for us that maybe someday we would do it,” Beckie said.

The Bleckers have seen the business become more difficult since the recession, as it’s now more challenging for investors and individuals to secure loans from banks.

With such intensive changes, Beckie admitted there’s some burnout, but she said she and her husband will miss the friends and customers they’ve known in the area. To Beckie, the best part of the job has been working with multiple generations of a family — from a couple to children and grandchildren.

“You build a relationship with the family,” she said.

Along with the banks, the Internet has also changed the business drastically. When Beckie started, she was working out of real estate books and helping customers find the type of home they wanted. Now with listings readily available online, Beckie said most customers have looked online and know what kind of home they want to buy.

“They have a good idea of what that home is,” she said.

Beckie has been the president of the Southeastern Minnesota Association of Realtors, sat on the state board of directors, and she’s been an Austin Area Chamber of Commerce ambassador and member for many years.

“It has been a pleasure,” she said.

Beckie said she and Brian will fondly remember the people they met along the way, but they’re ready for what’s next.

“We’re looking forward to a slower paced life and a new adventure,” she said.