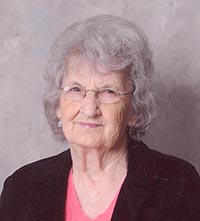 Carolyn passed away surrounded by family Monday, Sept. 22, 2014, at Thorne Crest Retirement Community. She was 84.

Carolyn was born May 9, 1930, to James and Theresa (Miller) Tyler in Port Byron, Ill. As a young child she and her family moved around the state of Illinois. As a young adult, Carolyn worked as a nanny and housekeeper for various families.

Carolyn was united in marriage to Hayse Greer on Sept. 10, 1949, in Seaton, Ill. Hayse worked for the railroad so the couple moved wherever he was needed for work. Work brought the couple to Albia, Iowa, where they started a family and were blessed with two daughters, Karen and Linda. The family moved to Albert Lea in 1969.

In Albert Lea, she was baptized and attended Calvary Baptist Church. She later joined Clarks Grove Baptist Church, where she enjoyed being on the church circle. She was currently an active member at Crossroads Evangelical Free Church.

Carolyn worked as a home health aide and was an aide for Good Samaritan Society and Thorne Crest Retirement Community.

Carolyn made the decision to move to Davenport, Iowa, to care for her mother in her later stages of life. She returned to Albert Lea to be closer to her family. In her free time she enjoyed collecting various things such as figurines, pitchers, Raggedy Ann and Andy dolls and who could forget her collection of bird items. She also loved to sew. She cherished her coffee times with friends and family. Carolyn enjoyed helping people and enjoyed giving back to others. She was affectionately known by her family as the “hugger.” She could not go anywhere without giving a hug to someone. She was also a strong Christian who was deeply rooted in her faith.

She is preceded in death by her parents; husband, Hayse; and siblings Walter Tyler and Hazel Hiebing.

The family would like to extend a very special thank you to the angels at Thorne Crest for their loving care that was shown toward Carolyn!