Celebrating the Arts and Artists fundraiser to return to Albert Lea 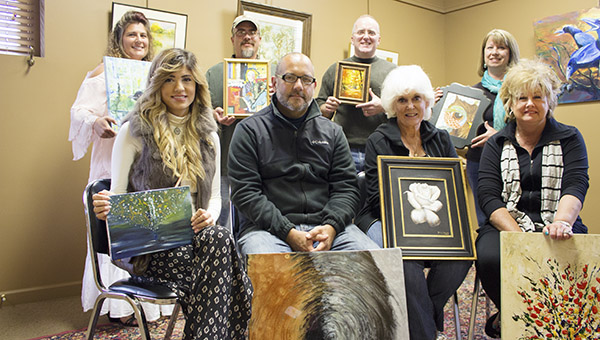 Local artists are on cloud 9

Nine artists will be featured at Artoberfest, this year’s Celebrating the Arts and Artists with the Albert Lea Art Center.

These nine artists are artists that Pat Garbisch, marketing director for the Art Center, said are artists to watch, and that they may not be very well known in the community. The artists will have their own displays and will be on hand to talk about their work.

This is the fifth year of the Celebrating the Arts and Artists fundraiser. In the past, only one artist has been featured.

Chris Charlson has lived in Albert Lea for four years. He’s originally from Stillwater and has been involved with art for 38 years, or since he was 4 years old.

Charlson creates his art with a mix of medias, including acrylics, oils, watercolors and clay.

His inspiration is people, he said. Charlson is inspired by his friends and people he gets to know, and paints how they affect him personally on the canvas.

Judy Gannon of Faribault has been painting for about two years. She mainly paints with acrylics but also uses watercolors.

Gannon said her biggest piece of advice is to just have confidence, noting that she doesn’t have years of experience but just put her mind to painting.

Kay Hay of Albert Lea has been painting for about two years like Gannon. Gannon and Hay get together in the summers to paint with one another.

Hay, who paints mainly with acrylics but also uses watercolors and oils, said she has a different inspiration every day. She swings from detailed to abstract so she doesn’t get tired of one style or the other, she said.

She also said she finds inspiration for paintings on Pinterest.

David Lenz of Albert Lea paints mostly with acrylics, though he does some digital work as well. His subjects are varied, and he swings widely between realism and abstract.

Lenz takes inspiration from his first job as a concept artist in the video game industry. He said he likes geometric patterns and vibrant, saturated color.

Mostly, Lenz said he strives to create art that feels inviting and that people want to be a part of.

Debb Peterson of Albert Lea paints mostly in watercolors as well as some acrylics. Just like Hay, she likes to find inspiration via social media, and often asks her Facebook friends what she should paint next.

On a Sunday, if she can get into a groove, Peterson said she can create two to three paintings in one day.

Peterson, who has been an artist for 13 years, said one thing she loves is painting late into the night. She said it helps her get in focus as there’s no chance of a phone ringing or the door being knocked on.

James Petersen has lived in Albert Lea for three years and creates his art with mixed media. The media he currently uses is cement, epoxy and watercolor.

Petersen did his first art show in fourth grade, which was about 40 years ago. His current technique that he does using epoxy is about two years old.

Petersen said he is inspired by texture and color and oftentimes creates art in his mind when he can’t sleep at night, then creates it the next day.

Mary Schulte of Albert Lea paints in all media.

She is inspired by social themes, people, portraits and animals. One series she is working on is an endangered species series.

May Ya-ya, who has lived in Albert Lea for one year, creates her art with mixed media as well. She mainly uses acrylics as well as found objects.

For all of her life, Ya-ya has created art. In college she majored in graphic design and works as a freelancer now, but still spends a lot of time on her art as well as her graphics.

Ya-ya said she uses her art to question herself, and that she likes to paint female figures. She incorporates recycled materials into her art, such as things she has collected from her life. Ya-ya also is inspired by texture and layering.

Melinda Ewert is a stained glass artist from Waterville, and is new to the Art Center. Garbisch said the Art Center has worked with most of the other artists in the past.

The fundraiser will also feature music by Austin’s John Koppa, beer tasting, hors d’oeuvres and a silent auction. The food will be German-themed and items such as gift baskets and certificates will be auctioned in the silent auction.

In addition, local potter Steve Tubbs has donated 100 mugs to be sold at the event. Each mug will be sold for $25.