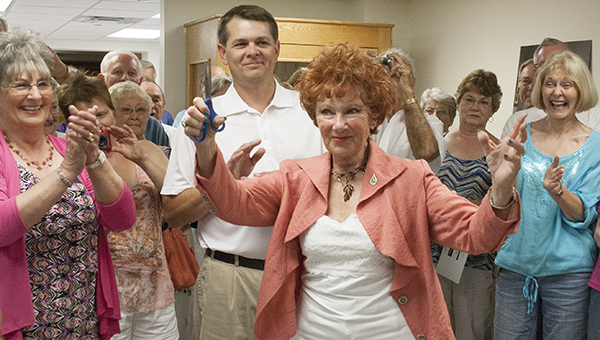 Albert Lea native Marion Ross, an actress known for her role as Mrs. C on “Happy Days,” raises her hands in the air after cutting a ribbon in the new Marion Ross exhibit at the Freeborn County Historical Museum in July 2013. –Sarah Stultz/Albert Lea Tribune

The museum, at 1031 Bridge Ave., last year underwent a $1.7 million expansion and now has 23,000 square feet of space, including exhibits, meeting space and a library.

“There’s something for everyone in here, whether they’re interested in the history of the county, in businesses or in exhibits ranging from dolls to machinery,” said Executive Director Pat Mulso.

The Freeborn County Historical Museum, Library & Village comes in at No. 16 on the Tribune’s list of favorite places of Albert Leans.

Mulso said the museum was built in 1965 and was first added onto in 1980. The most recent addition was completed in September 2013.

Some of the most popular exhibits are the Ross and Cochran exhibits, along with exhibits showcasing memorabilia from the former Albert Lea High School, including Col. Albert Lea, the ticket booth and lockers.

The museum’s library is presently the fastest growing part of the complex. Through the nine years she has served as executive director, Mulso said the museum has added between 30,000 and 35,000 pieces to the collection, including newspapers, cemetery records, church records and census records. Many items are on microfilm and some are accessed throughs museum subscriptions.

The village comes alive for families during the annual Autumn in the Village and for school-age children during Discover History Days.

Annual membership is $25 for individuals and $35 for families.