Most of the councilors said they had not yet decided if they would support the recommendations and needed additional time to look over the proposal.

“I know this is being done to try to streamline and make the city work more efficiently, but I’m going to reserve complete judgment on it right now until I have the chance to look at this a couple weeks and let it sit with myself,” said 2nd Ward Councilor Larry Baker. 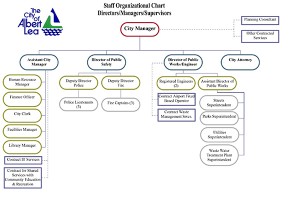 Other departments, such as the library, human resources and finance departments, would report to the assistant city manager instead of the city manager. The directors of those departments would become managers, and a new assistant public works director would be added under Public Works Director Steven Jahnke to allow added responsibilities for that department.

The proposal came after 2 1/2 years of study of the organization and the completion of a report earlier this summer by Springsted Inc. about the city.

Third Ward Councilor George Marin said he would like to know how the city would measure the success of the new model and which other cities have similar models.

He is concerned with the high number of categories that would report to the assistant city manager and public works director and pointed out that if the changes are made there would be no women department heads.

“We want to be an equal opportunity organization,” Marin said. He also expressed concern about the need for contractors and employees to be from Albert Lea.

“If the city is going to encourage people to buy local, invest local and grow local business, we need to be a leader in that area,” he said. 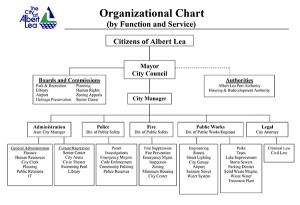 The Parks and Recreation Department would be split up under a proposed management change by City Manager Chad Adams. Maintenance of parks would be under the Public Works Department. — Provided

Sixth Ward Councilor Al “Minnow” Brooks said though he doesn’t disagree that the city could use some reorganization, he needs time to look and make sure the changes will be a good fit. He also wants to make sure the assistant city manager does not become overburdened.

Marin was hesitant about removing the city clerk and the library director as department heads and noted he thought those two areas were large enough to stand on their own.

“This is a hugely important issue,” Marin said. “We need the feedback from the community.”

Baker said he was concerned about making changes that would affect people’s lives.

“I’ve been through job situations where it’s pretty uncomfortable and stressful, “ he said.

He hoped anyone whose position is being eliminated would have the chance to find another place within the organization.

First Ward Councilor John Schulte said he wanted to understand the ramifications of the changes before making his decision.

Fourth Ward Councilor Reid Olson declined to comment. Olson sits in on meetings of the Albert Lea Parks and Recreation Advisory Board.