Dennis Lee Stoa, 70, of Frisco, Texas, died Thursday, Sept. 4, 2014, in his home lovingly surrounded by his family. A celebration of life service will be at 1 p.m. Sept. 27 at Brosh Chapel in Cedar Rapids, Iowa, at 2121 Bowling St. SW, with a reception immediately following in the Avacentre at Brosh Chapel. A private family inurnment will take place at a later date at the Dallas Fort Worth National Cemetery. 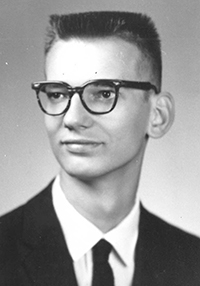 Dennis was born May 16, 1944, in Albert Lea, the son of Bernard and Alberta (Brighton) Stoa. Dennis graduated from Albert Lea Senior High School in 1962, joined the Army and served in Thailand as a microwave radio equipment repairman SP5 with noted accomplishments in rifle marksmanship.

There he met his wife, Aroon Chumpeelunge, and they wed at the United States Embassy in Bangkok, Thailand, and later had a Lutheran service by the Rev. Bob Wolf from Albert Lea, also stationed in Thailand. After his military service, they moved to Atkins, Iowa, then to Cedar Rapids where they raised a family.

Dennis worked first at Rockwell Collins, then as a biomedical electronics technician at Mercy Medical Center for 25 years. After retiring, they bought and operated the Seahawk Motel in Port Aransas, Texas, for nine years before finally settling in Frisco to enjoy their retirement at the age of 60. They loved traveling together — their travels include China, Thailand, Canada and an island cruise.

Dennis was skilled at repairing most anything and loved to tinker. He enjoyed auto repair and was active in the Cedar Rapids region of the Antique Car Club of America in which he served as newsletter editor as well as master judge. Dennis beautifully restored a 1928 Hudson automobile. His passion for collecting, repairing and knowledge in firearms was proudly carried to his two sons and he was a lifelong member of the NRA. Dennis had a softer side as well, enjoying the beauty of growing orchids with his wife.

He was preceded in death by his parents and a brother, Joel Stoa, of San Francisco.

Please share a memory of Dennis or an online condolence at www.broshchapel.com.