Funeral services for Donna Jean Hogan will be at 10:30 a.m. Thursday at Bayview/Freeborn Funeral Home. Deacon Mike Ellis will officiate. Interment will be at Sacred Heart Cemetery in Owatonna. Visitation will be one hour prior to the service at the funeral home. Online condolences are welcome at www.bayview funeral.com. 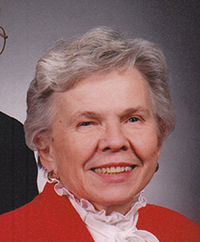 Donna Jean Hogan was born Jan. 4, 1929, in Owatonna, the daughter of Anton and Emily (Kubista) Haberman. She grew up in Owatonna, where she graduated from high school in 1946.

On June 14, 1949, Donna was united in marriage to John F. “Jack” Hogan at St. Hyacinth’s Church in Owatonna. Donna worked for many years as a credit supervisor at JcPenney. She was a member of St. Theodore’s Catholic Church and the VFW Ladies Auxiliary. Donna had a special knack for gardening and her garden was the envy of the neighborhood. She enjoyed canning the produce from her garden. She also enjoyed golfing with her husband and children and sewing clothes for her children and grandchildren. Most of all, Donna enjoyed her time spent with her family.