Haven’t we been down this road before?

The news this week that two juveniles in Mason City were charged this summer with felonies for stripping bark off a tree at an elementary school reminds us of the overbearing punishment of expulsion for a student in Wells in April who forgot a hay-baling pocket knife in a backpack in her school locker.

Tearing bark off a tree on public property is a felony? 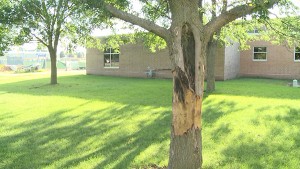 A tree at Roosevelt Elementary School in Mason City likely will die as a result of stripped bark. – Image courtesy KIMT

We are appalled that a prosecutor saw fit to charge the Mason City juveniles with second-degree criminal mischief, a Class D felony, for an act they didn’t even realize was a crime. These boys, ages 13 and 14, are barely past the age of reason — an undefined, hard-to-determine point at which a person knows right from wrong, usually between 7 and 13.

They likely knew that spray-painting a stop sign or breaking a window are unlawful acts, but the mother of one of the boys told the Mason City Globe Gazette that her son thought the bark would grow back. Some of it already had been peeled off when they began to strip more off. And the tree already had a big wound on one side. The boys don’t deserve felonies for what they thought was innocent behavior.

The mom summed the situation perfectly in her interview with the newspaper:

“I guess as a parent, I should be at fault for not teaching him that pulling bark off a tree will kill it,” she said. “I made sure to cover sex, drugs, drinking, responsibility, honesty and God, but trees, that one slipped my mind.”

The story gained attention across Iowa, and readers in online forums overwhelmingly feel the punishment was too harsh for the offense and worry that such treatment could scar the boys emotionally during formative years. Will they grow to think of themselves as troublemakers or law-abiding citizens? Every parent of a teen knows it is a careful line on which their kids balance as they gain independence.

We urge Mason City authorities to do the right thing. Drop or reduce the charges and have the boys be involved in the planting of a new tree, which ought to cost no more than $200 without hiring a spendy contractor to plant it. There are plenty of volunteers — like at any school — who would be happy to assist, in addition to the district’s groundskeeping crew.

Just because people in authority have power doesn’t mean they need to use the full extent of it. The law allows sensible solutions, like when police give warnings for speeding.

One more point: Each time this happens, we wonder why these heavy-handed punishers take such ridiculous steps in the first place. Being grown adults familiar with civics in any America city, surely they must have known that such harsh actions would attract the ire of parents and the general public and, with that, the news media, which then attracts more public outry on the issue. It makes us think the punishers might be somewhat less mindful than the children they punished.