Editorial: Pipeline delay is not good for moving grain

Oil is everywhere. It’s in our cars. It’s in all the plastics we use. Sometimes, it seems crazy that we are wasting this precious resource on making frivolous things like toys for children’s meals at fast-food restaurants. 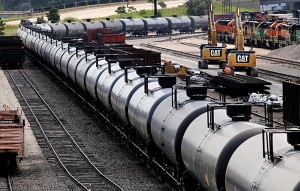 And there is no denying that the Bakken oil field in North Dakota is going to be a fossil-fuel resource for decades to come. An oil pipeline is needed between western North Dakota and the Twin Harbors of Duluth and Superior, Wis., or else Midwestern farmers year in and year out will struggle to move their crops to from grain elevators to buyers.

The action was highly questionable earlier this month when the Minnesota Public Utilities Commission broke with its past precedence and held off on approving the route already planned for the Sandpiper pipeline through northern Minnesota. The commission allowed the consideration of eight alternate routes. These alternates cropped up at the last moment and seem to lack any viable research. Sure some might have had the beauty of northern Minnesota at heart, but the goal of most of the environmentalists proposing the alternate routes was to more or less gum up the system because they oppose oil in general. The original route already used existing utilities corridors.

The PUC vote was 3-2, and to us here in farm country it seems the decision to delay — when North Dakota already has approved its portion of the pipeline — shows a clear disregard for the issue of moving corn and soybeans by rail. The delay in rail shipments of grain already is costing farmers and grain elevators tens of millions of dollars.

The more oil dominates the tracks, the harder it becomes to ship grain. A pipeline would relieve the pressure of rail traffic for oil. Corn and soybeans and other crops are valuable resources coming from Minnesota, not merely moving through. The matter of rail transportation for grain ought to be as much of a concern for the PUC as moving the oil by pipeline in the first place.

That said, we don’t live in northern Minnesota. So if we are to take the PUC’s word that the original route has flaws, even at this late stage of planning, we hope finding a new route doesn’t drag on for years. Our Minnesota farmers deserve better than that. And any new route ought not be some gerrymandering around the entire North Woods. Other areas of the state are as valuable as the northern part, too. Let’s be fair to all of Minnesota. The oil needs a commercially viable, reasonably direct route.