A celebration of life service for Eleanor M. Fjone will be at 11 a.m. Tuesday at Bonnerup Funeral Service, Albert Lea. The Rev. Richard Spande will officiate. A light luncheon and a time to greet the family will immediately follow the service. Private interment will be in Hartland Cemetery. Eleanor died on Friday, Aug. 29, 2014, at Mayo Clinic Health Systems, Albert Lea. She was 96. 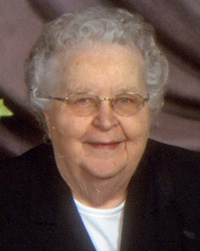 Eleanor was born on March 27, 1918, in Freeborn, the daughter of George W. and Julia M. (Jacobson) Hinkley. She graduated from Freeborn High School.

On Oct. 22, 1937, she married Wallace I. Fjone. After Wallace returned from WWII, they lived and farmed north of Freeborn for 37 years. In addition to farming, Wallace served as county commissioner and Eleanor cooked for area restaurants and worked at Birdseye in Waseca. When they retired in 1983, they were the first residents of Luther Place Condominiums in Albert Lea. Wallace died in 2001, and Eleanor continued to live in the condos until her health failed and she became a resident of Oak Park Place, and later St. John’s Lutheran Community.

She was a member of Cross of Glory Lutheran Church in Hartland, where she had been active in Ladies Aide, Joy Circle and the Altar Guild.

She was preceded in death by her parents George and Julia Hinkley, her daughter Joan, husband, Wallace, brothers Vernon, Floyd, Irving and Raymond Hinkley and a sister, Iva Proehl.