Memorial services for Esther C. Dawson, 102, of Albert Lea will be at 2 p.m. Sunday at Bayview/Freeborn Funeral Chapel. The Rev. John Holt will officiate. Interment will be in Rose Hill Cemetery in Wells. Visitation will be one hour prior to the service at Bayview on Sunday. Online condolences are welcome at www.bayviewfuneral.com.

Esther Caroline Dawson was born June 2, 1912, in Pickerel Lake Township, the daughter of Albert and Rosalie (Lembke) Bauers. She grew up and went to country school near Pickerel Lake. After she finished school Esther worked on her parent’s farm. She loved to help with the animals, taking care of dogs and cats and especially loved the horses. 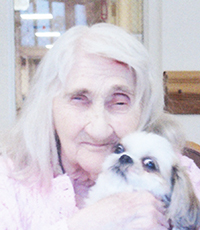 On Oct. 20, 1939, Esther was married to William Dawson. She was a member of First Lutheran Church in Albert Lea. Esther lived in Wells for many years before moving to Albert Lea in 2003. She enjoyed playing bingo and loved eating sweets. Blessed be her memory.

Esther was preceded in death by her parents; her husband, William; her daughter, Lorraine; son, Dale; a granddaughter; twin grandsons and two great-grandchildren; sister, Mable; and brother, Arthur.