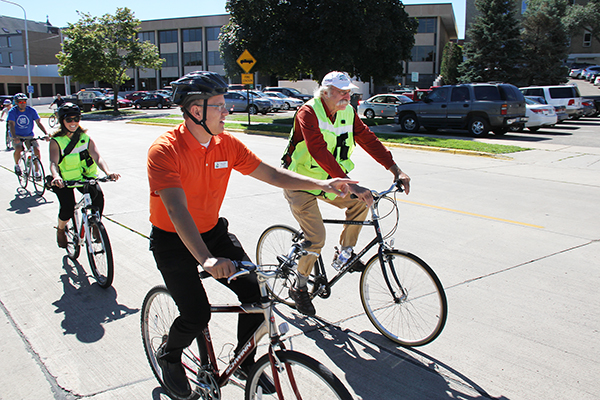 Many of the wide streets in Albert Lea could stand to have bike lanes to make them safer and to slow speedy drivers.

That was one of the recommendations of transportation expert Dan Burden, who returned to Albert Lea to make suggestions on the city’s automobile, bicycle and pedestrian infrastructure. Burden toured the city first in a car, then from the seat of a bicycle.

“The roads where people were going so fast were also so wide,” he said.

Effective use of paint — such as that used for bike lanes — would reduce the urge for many drivers to speed because the street becomes narrowed. He cited Broadway, due for a bituminous mill and overlay next summer, as a problem street. He said it would become more attractive with bike lanes, too, and provide safer turn ratios and sight lines.

He suggested the Blazing Star Landing be turned into a mixed-housing neighborhood where people enjoy being close to the downtown, have views of Albert Lea Lake, are near recreation — the lake, Frank Hall Park, the Blazing Star Trail and the fishing spots at the channel between lakes.

Burden biked on Lake Shore Drive, a one-way route along the shore of Fountain Lake that is partially paved and partially gravel. It is shared by bicycle riders, walkers and slow-moving motorists alike.

He suggested the city leave it the way it is.

“It’s so beautiful, why pave it?” Burden said. “It’s one of the great good places to get away from traffic.”

Burden will present the results of his audit at a workshop at 8:30 a.m. Thursday at Albert Lea City Hall.

Burden said leaders in Albert Lea have been empowered by the Blue Zones and are ready for the next steps.

Albert Lea in 2009 was the pilot city for Blue Zones certification, an effort at taking steps to help residents in cities live longer, happier, healthier lives. Albert Lea went through what was dubbed the AARP/Blue Zones Vitality Project, and international experts gave local residents and leaders advice on healthy living. Burden first visited Albert Lea in January 2009 as part of the Vitality Project.

Other places, from Oskaloosa, Iowa, to Hermosa Beach, Calif., have worked in conjunction with the Minneapolis-based Blue Zones organization to launch similar steps as Albert Lea has.

Burden said the workshop on Thursday will be an opportunity to celebrate the transportation successes in Albert Lea, such as bike lanes on Front Street and connectivity of sidewalks and trails.

He said the modern economy pits cities in competition to attract companies, jobs and talent. The old way to garner those things was mainly through tax incentives. Anymore, the decision makers also want quality of life, and that includes health-oriented infrastructure.

“They are innovators who just want good places to raise their families,” Burden said.