Fundraiser set for this Saturday

First Lutheran Church next summer intends to host a nondenominational, three-week music camp as a memorial to a 30-year-old woman who died Jan. 25 from complications with a pulmonary embolism. 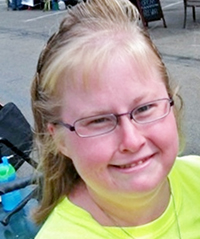 Jessica Lokken was hardly ever sick, said her mother, Julie Lokken. The daughter walked every day, drank green tea, ate healthy food, yet still died within five hours that day, all because of a blood clot doctors discovered in a pulmonary artery of one of her lungs.

After the funeral, Julie approached Tim O’Shields, the church’s music minister, about finding a lasting memorial for her daughter. After months of consideration, he arrived at what he said is called the First Lutheran Church-Jessica Lokken Music & Arts School & Camp.

Jessica loved music and participated in the church choir, “so this is very fitting for her memory,” her mother said.

Julie said people sought Jessica out so she could brighten their day.

“Jessica had no hatred in her soul. She is the only person I ever met who I could say she loved everyone in her life,” Julie said.

There will be a rib dinner this weekend at First Lutheran’s Bethany Hall to raise funds for the camp. Tickets are $10. The first seating is at 4:30 p.m. Saturday and the second is at 7 p.m. There will be a silent auction, too.

Jessica called for her mother at 5 a.m. Jan. 25. Julie went into the bedroom and found Jessica had slid onto the floor when she got out of bed and couldn’t get up. The mother called 911. Firefighters arrived, then police officers arrived and then the ambulance got there.

“No one thought that there was any urgency,” Julie said.

Jessica was taken to the emergency room and things got worse fast. There, she had to be resuscitated — which hospital staff call “coded,” medical jargon for saying the patient is dying. The woman was airlifted to Rochester.

She coded again in the helicopter and three more times during the four hours she spent at St. Marys Hospital in Rochester. Her condition was so fragile, medical staff had to manually give air to Jessica, rather than use the machine.

“Because of the amount of times she coded, if they had been successful in bringing her back, she would not have been the same person,” Julie said, wiping tears as she described the events of that day.

Her request of O’Shields came in February when the music minister was relatively new to his job. He had started in October. He said he thought and prayed about finding an idea with a lasting impression, “and nothing came to me.”

However, he had interviewed last September and toured the church building. Something stirred inside, something child-ministry-related, while he was on the third floor and thought something might come of it.

“It was just a really odd sensation,” O’Shields said.

The music camp would provide more young people with an opportunity to learn music and arts in a Christian atmosphere at zero cost, he said.

“I really do think this will have traction,” O’Shields said.

He noted it will be nondenominational, and First Lutheran Church is donating the space.

“We welcome all children to this school,” he said.

He mentioned children can learn choral music and instruments such as recorders, percussion and possibly the harp. Fine arts are planned for the curriculum, too. He gave watercolors as an example. Some aspects are in the planning phase.

Children would return home each day, and he said he hopes to grow the camp as the years go on.