Funeral services for Florence “Tootie” Matz, 92, of Hayward will be at 10:30 a.m. Friday at First Baptist Church. The Rev. Clayton Balsley will officiate. Burial will be at Hillcrest Cemetery. Visitation will be from 5 to 7 p.m. Thursday at Bayview/Freeborn Funeral Home and one hour prior to the service at the church on Friday. Online condolences are welcome at www.bayviewfuneral.com. 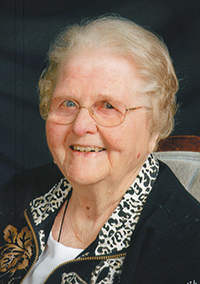 Florence was born Sept. 1, 1922, in Albert Lea, the daughter of Delos and Grace (Lundberg) Cornick. She grew up in Albert Lea and graduated from Albert Lea High School. She was a lifelong member of First Baptist Church.

On July 25, 1942, Tootie was united in marriage to Edwin S. Matz in Flint, Mich. She was one of the original members of the Albert Lea Farmers Market. She was a baker and had a large following for her baked goods, especially her famous sweet rolls. During her lifetime she had many jobs, starting as a “Rosie the Riveter” in airplane factories during World War II.

The couple started farming in the Conger area and then moved to a farm north of Hayward where they farmed for 50 years. She was a baker at the Standard Truck Stop. They were involved with VOCA and volunteered for overseas assistance helping locals improve farming practices in Romania and Czechoslovakia. Tootie enjoyed gardening — especially having her grandchildren involved — baking, quilting, crocheting, playing cards, coin collecting and especially spending time with her family.

Tootie was preceded in death by her husband, Ed Matz; her parents; and her siblings Chuck Cornick, Dorothy Hemingway, Marcelle Bruley, James Cornick and Carroll Cornick.