Funeral services for LeRoy Offenhauser, 91, of Albert Lea will be at 2:30 p.m. Wednesday at Bayview/Freeborn Funeral Home. The Rev. James Peterson will officiate. Burial will be at Greenwood Cemetery, Glenville. Visitation will be from 1 p.m. until the time of service at the chapel. Online condolences are welcome at www.bayviewfuneral.com. 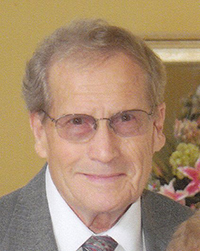 LeRoy Offenhauser was born on Oct. 19, 1922, in Eagle Grove, Iowa, the son of Garnett and Julia (Johnson) Offenhauser. He attended and graduated from Albert Lea High School. LeRoy was united in marriage to Jeanette Wendt on Dec. 18, 1942, in Glenville. LeRoy worked for Emil Olson and Sons where he was the Pit Foreman when he retired. He enjoyed senior bowling, hunting pheasants, fishing, watching the Minnesota Twins, Vikings and the Gophers, gardening, bird watching, golfing and was also a volunteer for the Glenville Fire Department. LeRoy was a member of the Glenville City Council where he served as the city clerk and was a member of Crossroads Church.