It might be small, but this park possesses prime real estate 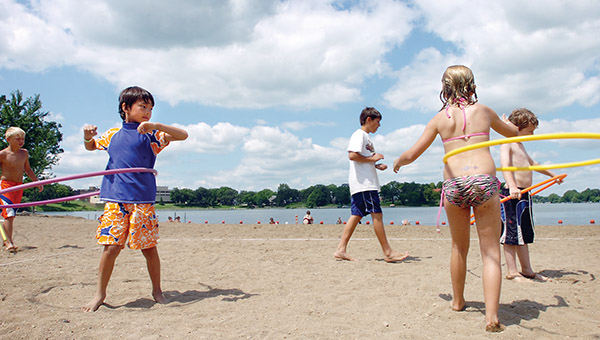 Children play with hula hoops a few years ago during a luau at the City Beach organized by the Albert Lea Parks and Recreation Department. – Brie Cohen/Albert Lea Tribune

The beach, at 300 Johnson St., officially opened in 1928 and for years has been a popular summertime place, especially on really hot days. At its height, there were swimming classes, water carnivals, speed boat races and diving contests.

City Beach comes in at No. 21 on the Tribune’s list of 25 favorite places of Albert Leans.

Though it may not be as popular as in years past, it still is a common place to go during the summer months for sunbathing, wading in the lake and having a simple family picnic.

The regional park features a sandy beach with a roped-off swimming area, a bathhouse with restrooms and changing rooms, a small public dock and three permanent picnic tables. There are no lifeguards on duty.

Albert Lea Parks and Recreation Department hosts a luau for children there each summer.

The beach also has a sand volleyball court and a skate park, which are popular among children and teenagers. The skate park was a point of contention last year, with some neighborhood residents wanting to move it, but city officials decided to keep it where it is and update the rules. The skate park, converted from tennis courts in 2001, has ramps and rails for skateboards, scooters and freestyle bicycles.

At dusk on the Fourth of July, Albert Lea-Freeborn County Chamber of Commerce’s fireworks display is shot off from City Beach.

According to the city’s parks master plan, city officials hope to someday add a playground in the sand area and one or two small picnic pavilions.