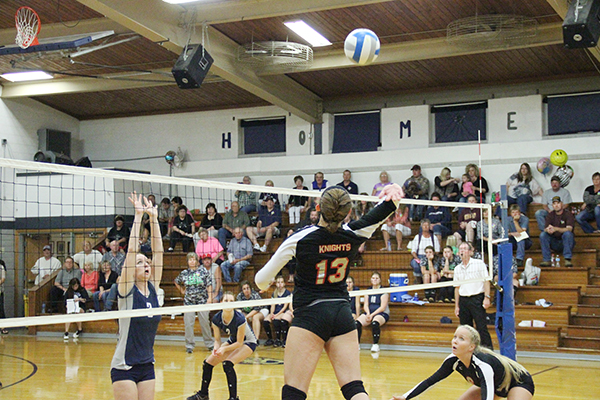 Kasey Knutson for the Alden-Conger Knights leaps to spike the volleyball over the net Monday as Madi Ziebell holds her hands high for the Glenville-Emmons Wolverines. – Tim Engstrom/Albert Lea Tribune 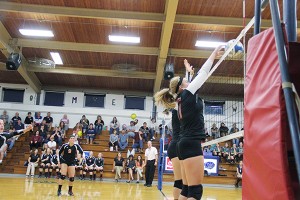 It seems when Cassie Gilster is serving for the Alden-Conger Knights, she is kind of like the Energizer Bunny — she keeps going and going and going, not one to give up the serve.

The Alden-Conger Knights defeated Glenville-Emmons, winning in three sets and making for a quick evening. The team is now 3-1 for the season.

She credited the quick victory to “keeping up our energy.”

“We tend to go down to the level of the team we are playing,” Gilster said. “This time we had lots of positivity.”

The senior said the team worked more on conditioning than last year and more on shuffles and blocks. Each time the serve was in her hands, the Knights racked up points.

Coach Jolene Bute, in her fourth year, said this squad shows strong camaraderie and stays together to be aggressive. She works hard at teach the fundamentals of volleyball, and she said they are well-mannered in response.

Senior Liesel Theusch also shined, having four aces, six kills, a block and three digs. Eighth-grader Erika Bute, one of the smallest people on the court, managed to have 13 assists, in addition to seven aces and three kills.

On the Wolverines’ side of the ball, senior Madi Ziebell led the way with seven kills, one ace block and 18 digs. Glenville-Emmons drops to 1-5 for the season.