Leona Edith Rystrom, 100, passed away peacefully at St. John’s Lutheran Community Tuesday, Sept. 23, 2014. Her funeral service will beat 2 p.m. Saturday at Salem Lutheran Church in Albert Lea. The Rev. Mark Niethammer will officiate. There will be a visitation at Bonnerup Funeral Service from 5 to 7 p.m. Friday and one hour prior to the service at the church. 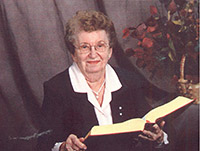 Leona was born May 27, 1914, to Charles and Minnie (Funk) Nordin in North Branch. Leona was one of seven sisters, Olive, Pearl, Doris, Verna, LuVerne and Joyce, and one brother, Carl.

She married Harry Rystrom on Dec. 20, 1931. They farmed in North Branch until 1948 when a tornado destroyed that farm. They moved to Excelsior for one year, where Harry managed a large dairy farm and Leona cooked for the hired men and kept a huge eight-bedroom house on Lake Minnetonka. Their next move was to Carlton, where Leona worked for Diamond Match Company until her retirement. After retirement they bought a home in Stacy, where many of their relatives were located. Their last move was to Albert Lea where daughter, Pauline, and her husband, Hugh lived. They moved into Thorne Crest Retirement Community where Leona’s husband passed away in 1994. She continued living in her apartment at Thorne Crest for the next 15 years. She met wonderful friends at Thorne Crest, had a garden and provided tomatoes and flowers to the guests all summer long. When winter came she made quilts and worked on crafts, mended clothing for anyone who needed her help, took care of the indoor plants and with a freezer full of baked goods, she would put on her 30-cup pot and invite everyone at Thorne Crest for coffee. She spent some of the happiest days of her life at Thorne Crest. She especially loved Lynn and Lindy who kept her busy making decorations and crafty things for holidays. She won many purple ribbons for her crafts at the Freeborn County Fair. She even sang with the Thorne Crest Singers.

Wherever Mom and Dad lived, a church was the first thing they looked for in the community. They often were janitors of the church where they lived and would plant the flowers and keep the grounds beautiful. They loved Salem Lutheran Church, where Mom was active in the Sew ‘N Tell and Circle.

She was preceded in death by her parents; husband; a daughter, Elaine; and granddaughters Paula Prince and Amy Jo Hall.

Just recently when Leona’s health began to decline, she was moved to St. John’s Lutheran Community. Leona’s family will always be grateful to the staff at St. John’s for the comfort and love they offered her during her last days.