A 29-year-old Albert Lea man was charged in Freeborn County District Court on Wednesday with stabbing another man during an altercation last weekend. 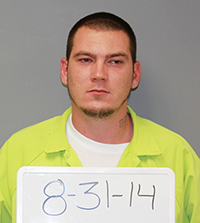 Timothy Walter Lenze faces one count of second-degree assault with a dangerous weapon.

Court documents allege Lenze stabbed a 24-year-old Albert Lea man multiple times on his upper and lower back, near his clavicle and on his hand. The injuries were not life-threatening.

Reports stated the altercation occurred after a night of drinking and celebrating the anniversary of Lenze’s father and the other man’s mother.

Court documents stated when police arrived at the scene, at about 2:23 a.m. Aug. 31, the scene was chaotic, and officers had some difficulty controlling the people in the room.

Reports indicate the 24-year-old man was allegedly assaulting Lenze’s father, striking him several times and then attempting to choke him. At one point in the altercation, court documents say, the man held a sword and threatened Lenze’s father.

The mother told police she saw Lenze jump on her son’s back but claimed her son did not pick up a sword until after he was stabbed.

Lenze reportedly said he thought his father was being stabbed when police arrived in response to his 911 call.

Lenze is next slated to appear in court on Sept. 18.