Memorial services for Olga May Schmitt, 97, of Albert Lea will be at 11 a.m. Saturday at Lunder Lutheran Church. The Rev. Randy Baldwin will officiate. Interment will be at Lunder Cemetery. Visitation will be one hour prior to the service at the church. Online condolences are welcome at www.bayviewfuneral.com. 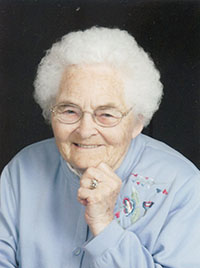 Olga May Schmitt was born Aug. 2, 1917, on a homestead in Mountrail County, N.D. She was the second child and only daughter of Carl and Anna (Finstad) Aanerud and grew up with six brothers. She was baptized and confirmed in Bathania Lutheran Church and attended school into 10th grade in Van Hook, N.D. During the depression and dust storms of the early 1930s, the family moved to northern Canada and in 1934, the family returned to Freeman Township, south of Albert Lea.

Olga worked for various homes as a “mother’s helper” or “hired girl,” but her dearest wish was to return and graduate from high school. With determination she accomplished this and graduated from Emmons High School with the class of 1939.  Following graduation she worked for F. W. Woolworth stores in Albert Lea, Chicago and Los Angeles. During World War II she was employed in the offices of North American Aircraft in Inglewood, Calif.

On May 10, 1945, Olga married Staff Sgt. Ervin M. Stenseth of Freeman Township, while he was stationed in Dallas. On Ervin’s discharge from the Army, they returned to Albert Lea. They purchased the Twin Lakes Hardware Store, which they operated until Ervin’s death in 1957. Ervin and Olga were the parents of four daughters, Linda, Diane, Laurie and Robin.

On Oct. 19, 1961, Olga married Laverne W. Schmitt at Lunder Lutheran Church. They moved to Laverne’s farm near Emmons where they farmed until retiring to Albert Lea in 2000. Laverne passed away in 2003.

Olga worked in the Auto License Bureau when Laverne was deputy registrar of motor vehicles in Freeborn County. While Olga’s daughters were growing up, she was very active in their lives. She served as 4-H leader and Brownie and Girl Scout leader. She also taught Sunday school and vacation Bible school. Olga was a longtime member of Emmons Lutheran Church and also of the Twin Lakes Senior Citizens and Emmons Legion Auxiliary. Olga was a caregiver all her life. Growing up she helped care for her younger brothers. As a young widow, she cared for her own children, as well as caring for each of her husbands through long illnesses prior to their deaths. Olga loved caring for her home, gardening and reading. She was happiest when she was surrounded by her family.

She was preceded in death by her parents; both husbands; and brothers Arthur (Mabel), Clarence (Anne), Robert (Alta), Alan (Patricia) and William (Helen).