Olympic Trials are next step for Albert Lea’s Lindsey Horejsi 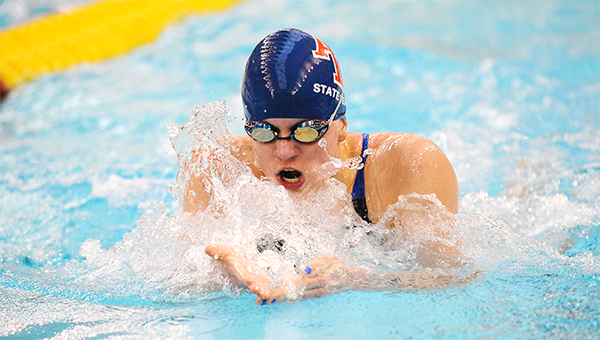 Lindsey Horejsi swims the 100-yard breaststroke on Nov. 20, 2013, at the Class A state swimming meet. Horejsi qualified for the 2016 Olympic Trials as the cut times were announced Thursday. — Micah Bader/Albert Lea Tribune

The times Horejsi posted July 30 as a member of the Atlantis Swimming Federation at the Junior National Meet in Irvine, Calif., made the cut for the U.S. Olympic Trials in two events: the 100 and 200-meter breaststroke.

“I’m really excited to be heading back,” said Horejsi. “Last time I only made it in the 100 breaststroke.”

According to Atlantis coach Mark Vininski, the Olympic Trials cut times were announced Thursday, and Horejsi made them easily. She posted times more than two seconds faster than the minimum in each event. The cut time in the 100-meter breaststroke was 1:11.49. Horejsi swam 1:09.37. In the 200, it was 2:34.99. Horejsi swam a 2:32.33.

“This is awesome,” Vininski said. “It’s the first step in the process. Now we just need to work on finishing up and getting fast.”

Horejsi has been training hard to recognize her Olympic dreams. At her latest meet as part of Albert Lea High School’s swimming team, she set pool records at Owatonna in the 200-yard individual medley (2:09.94) and the 100-yard breaststroke (1:02.70). She also teamed up with Anna Andersen, Ahnika Jensen and Haley Simon to set Owatonna’s pool record in the 200-yard freestyle relay (1:41.31).

On top of working with Vininski and Albert Lea coach Jon Schmitz, Horejsi has also been training with Jeff Jimenez, who was working with her on Thursday.

“She’s got to be the hardest-working athlete I’ve known,” Jimenez said.

The Olympic Trials are June 26 through July 3, 2016, at the CenturyLink Center in Omaha.

For now, Horejsi will compete for the Tigers and defend her state titles in the 100-yard breaststroke and the 200-yard individual medley.